The Federal Government has allayed fears that it has abandoned the Bodo-Bonny road project 10 years after it was awarded in 2002. The government attributed the delay in the completion of the project to under-funding, community disagreements and poor performance of the  contractor handling the  work. Minister of State for Works, Ambassador Bashir Yuguda, who said this during an inspection of the project and  other Federal Government roads in the state, said that the present administration was committed to  completing the road.

He said that his visit to the road project was a demonstration of the commitment of the Goodluck Jonathan- administration towards the completion of the roads.

The minister described the project as very important to the  nation as Bonny Island is one of the economic hubs of the nation.

‘It is very important for the nation, because this is the only link road to Bonny island and we all know the economic activities in the region.

“Our NLNG is there, oil exploration is taking place there, so, Mr President attaches a lot of importance to this project, he said.

The Public Relations Officer of Gitto Construction Limited, Prof Jason Ossai, blamed funding as the major handicap of  the project.

Prof Ossai also said that the N1.5billion released annually for the project was not enough, and asked for improved budgetary allocation to enable the company complete the road project.

In a related development, the Minister of State for Works, Yuguda says President Jonathan is determined to complete all roads linking the ports and refineries in the country.

Inspecting the Onne Port Access road, the minister also said that the ministry of Niger Delta Affairs has been financially empowered to complete the East West Road.

He described the Onne Port access road as one of the dividends of the amnesty programme, and commended the contractor, RCC for doing a good job. 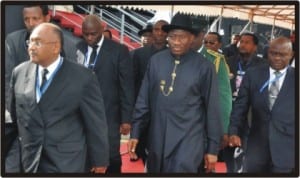