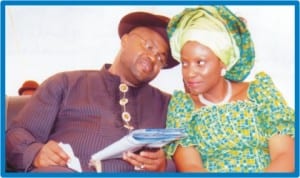 The Senator representing Rivers South-East Senatorial
District in the National Assembly, Hon Magnus Abe has challenged the North to
contribute its own quota to the development of the Nigerian economy.

In a chat with newsmen in Port Harcourt, the Chairman,
Senate Committee on Petroleum (Downstream) noted that the country can’t afford
to rely on crude oil alone; stressing that we must look beyond oil revenue in
the development of Nigeria’s economy.

In apparent reaction to a statement credited to Sen. Abba
Ibrahim, that the country’s wealth had been cornered by oil producing states,
he said “why is it that every time Nigerians gather, all we talk about is how money
is being spent; how come in this country we never gather to talk about how
money is being made”.

Sen. Abe added that “if you give the whole money in the
Niger Delta to the North, it won’t solve their problems” emphasizing that “the
challenge of Nigeria is that the country is not productive enough; we are not
generating money; fighting will not help this country; it will only bring
problems that we cannot handle”.

He noted that “there’s so much in this country that we can
tap, including resources in Abba Ibrahim’s own state; that can contribute to
the development of Nigeria, why don’t we bring that to the table”.

“Every region must bring in; equal strength and equal
percentage of what they are producing for us to share. In that way everybody
will work to guarantee adequate benefits”. Sen. Abe who is also the Chairman,
Senate Joint Committee, investigating the fuel subsidy regime said.

The former Information Commissioner and Minority Leader in
Rivers State House of Assembly declared that “if you only talk about where
money is going and you don’t talk about where money is coming from, you can
never make a balanced argument”.

The one time Secretary to the Rivers State Government
disclosed that the North was blessed with rich human and natural resources that
could be harnessed to improve the country’s economy and living standard of the
people.

Sen. Bukar Abba Ibrahim of Yobe State had in an interview;
said the Niger Delta is cornering greater chunk of the Nation’s wealth under
various programmes such as the Niger Delta Development Commission (NDDC),
Amnesty Programme and 13% derivation, among others.

For A Mess Of Porridge …Powerful Nnaji Quits, Crest-Fallen