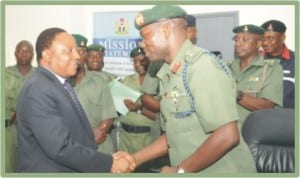 Rivers State Governor, Chibuike Amaechi in Berlin at the
weekend called on the Academic Staff Union of Universities (ASUU) to take his
government to court if it was convinced that it breached the law.

Amaechi made the call in reaction to the one-day warning
strike by ASUU over the re-appointment of Prof. Barineme Fakae as acting
Vice-Chancellor of Rivers State University of Science and Technology (RSUST)
Nkpolu, Port Harcourt.

He told newsmen in Berlin, Germany, that RSUST was governed
by a state law and could not be dictated to by ASSU´s national leadership with
regard to the appointment of its vice-chancellor.

´´There is a difference between the federal law which the
president had signed which governs federal universities and the state law.

´´They (ASUU) want me to disobey the law that sets up RSUST.
I wish them luck but this will not happen within the period that I am governor
of Rivers State.

´´There is what is called the rule of law and true federalism,
unitary system should not be applied in a state.

´´The law setting up RSUST allows its vice-chancellor to run
for three years second term after the expiration of his first term.´´ Amaechi
said.

He expressed regret that professors in the university, who
were members of the governing council, stepped out of the council and made
themselves candidates for vice-chancellor.

“This action is improper,’’ he said.

Amaechi said he re-appointed the university vice-chancellor
in acting capacity at the end of his first tenure based on law, pending the
nomination of another candidate by the university council.

“ASUU in Rivers State wants to take up the position of a
governor to appoint the vice-chancellor. There has to be discipline and there
has to be implementation of law and order”,
he said.

The governor vowed that he would ensure that no salary was
paid to any lecturer who failed to report for duty.

He said that it was unfortunate that lecturers in RSUST who
were the highest paid in Nigeria, were in the habit of blackmailing his
administration.