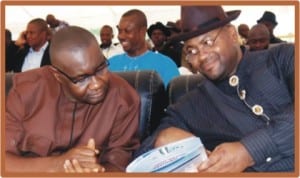 The First phase of implementation of the United Nations
Environment Programme (UNEP) report on the clean up of Ogoniland is to gulp the
sum of $1billion.

Mrs Nunieh Okunu said that the agency intends to set up soil
test centres across Ogoniland while a centre of excellence will be established
with a view to impart useful skills on the people.

She said that John Hopkins University in the United States
has been contracted to assist the agency determine the level of impact of the
pollution on the people, and stressed the need for youths in Ogoniland to
desist from involvement in crude oil theft activities as the entire exercise
will be useless if crude theft activities are allowed to continue in the area.

The HyPER National Coordinator, who urged those spoiling oil
installations to participate in the clean-up exercise to set up Cooperatives Societies,
also denied allegations that the agency has authorised some persons to issue
forms to the people in connection with the project.

While describing the progamme as part of the commitment by
the Federal Government to ensure total restoration of Ogoni environment, she
stressed the need  for massive support by
the traditional rulers and other stakeholders to ensure the success of the
exercise in the area.

Meanwhile, the agency has set up sign posts in all the
affected sites in Ogoni. Responding, the Gbenemene Tai, who is also the
Chairman of the Rivers State Council of Traditional Rulers, King G.M.K Giniwa
said that the Ogonis were happy that the Federal Government has commenced the
process for the implementation of the UNEP report on Ogoniland.

King Giniwa said that the Supreme Council of Ogoni
Traditional Rulers had already appointed a Committee to work with the agency
with a view to ensuring the success of the entire cleanup exercise.

The traditional ruler said that the Ogonis have unanimously
resolved to cooperate with any agency that may be involved in the cleanup
exercise, and urged the people to discontinance any utterances and/ or
activities that are capable of threatening the peace of Ogoniland.

Also speaking, the former Commissioner for Environment,
Rivers State, Prof Roseline Konya, emphasised the need for compensation to be
paid to the people.

Prof Konya also stressed the need for the implementation of
all the recommendations as contained in the UNEP report.

Another Frogs Debate …Those Calls For, Against State Police