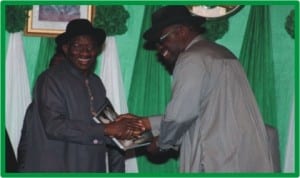 The National Union of Petroleum and Natural Gas Workers
(NEUPENG), has given the Federal Government up till tomorrow to begin payment
of subsidy arrears or face a nationwide strike.

The National President of NUPENG, Igwe Achese told newsmen
in Lagos that the demand for payment of fuel subsidy claims became necessary
because its members’ jobs were at stake as marketers can no longer keep them
due to huge debt owed by the Federal Government.

Achese said the on-going strike action by its members in
Abuja was to force the Federal Government to implement the agreement signed
with the union in July.

‘Today, as I speak to you, there is crude in Chad, in Ivory
Coast and some other parts of African
countries that are producing oil.

Nigeria that is the 6th is going out to these neighbouring
countries again to import petroleum products. It’s a shameful thing.

‘We are also requesting that they must pay this oil subsidy
or we might be forced to declare a nationwide strike. Nigerians are suffering
in the hands of SPDC and Chevron, those that have put in between 25 and 30
years do not have pension contribution and their contributions that are being
deducted from their salaries are not being accounted for and can not be
traced”, he said.

The NUEPENG boss also denied speculations that the strike
action embarked upon by its members in Abuja was sponsored by some indicted
marketers in the fuel subsidy scam.

The Tide reports that NEPENG had advised the Federal
Government to fix the nation’s oil refineries and bad roads.

In the meantime, the Federal Government says it will, today,
pay the outstanding subsidy claims to some oil marketers.

The Tide recalls that oil marketers and tanker drivers since
last week had been on strike, which has paralysed business activities in Abuja.

Based on the ugly situation, the Minister of Petroleum
Resources, Mrs Diezani Allison-Madueke appealed to oil marketers to shelve their
strike and allow Nigerians celebrate the Eid-el-Fitr.

The minister said the Federal Government was taking
necessary steps to address their grievances and assured tanker drivers that the
Ministry of Finance would ensure that the situation was addressed and marketers
paid their genuine claims.

Meanwhile, some residents of Nsukka in Enugu State have
appealed to both the Federal Government and the striking oil workers to bend
backwards and reach an agreement.

The residents, in separate interviews with newsmen yesterday
said this would help to avert a nationwide strike.

They said any nationwide strike at the moment would further
impoverish the masses in the country.

Mr James Nnaji, a civil servant, said any strike at the
moment Nigeria was going through security challenges would put more pressure on
security agents, and would adversely affect Nigeria’s economy.

“The union should embrace dialogue, instead of embarking on
a nationwide strike that will bring more hardship to Nigerians,’’ he said.

Mr Charles Onah, a commercial bus driver, said NUPENG should
consider the suffering its action would bring upon many Nigerians.

“Strike is not the best option. I plead with the union to
avoid anything that will overheat the already heated polity.

“Some of us feed our families and train our children as
commercial bus drivers.

“Now we are struggling to get money to enable our children
go back to school in September. Any nationwide strike will be a setback to us
and members of our families..

“Every Nigerian should understand that this country belongs
to all of us, and should avoid anything that will overheat the polity and
paralyse the economy.

“I plead with NUPENG to consider the interest of about 160
million Nigerians, who will face extra suffering in the event of the strike.

“Everybody should assist the government to take this country
to the next level,’’ Onah  said.