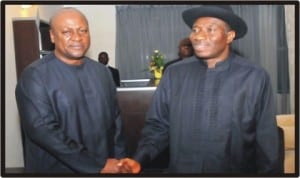 Fourteen states have been pinpointed as states to be ravaged
by floods between now and the 19th of August, 2012.

This was contained in a statement issued by the Deputy
Director, Erosion, Flood and Coastal Zone Management Department of the Ministry
of Environment, Dr Morohunkeji Oyeleke.

The states are Adamawa, Plateau, Sokoto, Jigawa, Borno and
Gombe Others include Kebbi, Yobe, Taraba, Oyo, Zamfara and Kano states.

Others also listed amongst the forewarned flood prone states
were Bauchi and Katsina.

Others are Gada, Goronyo and Shinkafi in Sokoto State;
Gumel, Hadeija, Miga and Mallam Fatori in Jigawa state; as well as Bama,
Briyel, Damasak, Dikwa, Geidam, Ngala, and Kukawa in Borno State.

Also to be affected are Apata, Bodija, Challenge, Moniya,
Ojoo, Eruwa, Odo Ora, Ibadan and Oyo town, all in Oyo State and Kaura, Maru,
Gusau; and Namoda in Zamfara State.

Others are Gezawa, Gwarzo, Karaye, Wudil and Kano, all in
Kano State; Azare, Bajoga, Jamaare, Kari and Tafawa Balewa in Bauchi State; and
Bakori, Bindawa, Daura, Jibiya, Katsina and Funtua, all in Kastina State.

Oyeleke, therefore, called on governments of the affected
states to take precautionary measures to avoid loss of lives and property.

The North Eastern part of the country is the most affected
as all the states-Adamawa, Yobe, Borno, Gombe, Taraba and Bauchi- were listed.

Kaduna is the only state spared from the North West and Oyo State
is the sole representative of the South West while Plateau is that of the North
Central.

Missing from the list is Lagos, a state that has suffered
from flooding in recent years during the rainy season.