The Rivers State Governor, Rt Hon Chibuike Amaechi has hinted of plans by the government to employ about 200 additional doctors to man the new medical centres and hospitals being built across the 23 local government areas of the state.

Governor Amaechi who gave the hint while declaring open the 25th Nigerian Medical Association (NMA) Scientific Conference and Elections, tagged, ‘Securing Health Through the Workplace: The 21st Century Challenge’, held on Wednesday in Port Harcourt, said that the government’s decision to employ more medical doctors was  informed by the acute dearth of adequate medical personnel to run the health facilities.

The governor also said that the state government would partner NMA in setting up a new teaching hospital to bridge the yawning gap in medical manpower training in the state.

Amaechi said the partnership would be geared towards setting up a well equipped medical college where quality manpower would be produced, adding that,  “I don’t believe that a medical school is opening a hall, it is  all about producing quality and well trained doctors”, he stressed.

In order to achieve this, the Rivers State Governor argued that deliberate steps must be taken and strategic planning made  to set up such institution.

He, however, charged the doctors to be alive to their responsibilities since the state government had shown maginamnity in paying the consolidated salary for medical personnel, equipping and building hospitals across the state.

Amaechi reminded the medical doctors that their activities were more of service to society and saving lives than making money.

Speaking earlier, chairman of the NMA in Rivers State, Dr Bonas Harry said the state could only produce 30 per cent of medical doctors from various medical schools across the country.

In order to shore up the gap, Dr Harry recommended the need for the state to establish a new medical school, pointing out that the state University of Science and Technology (RSUST) and Braithwaite Memorial Specialists Hospital (BMSH) could serve as a template for the scheme.

He said, “Rivers State is long overdue to establish a medical school, to beef up medical manpower needs as it will maximise the state health demand”

The Rivers State NMA boss said the annual conference was organised to school members in modern global practices, emphasising that ‘ societal expectation is very high. The enormity of responsibility bestowed on us demands that we have a lot to do”.

He commended Governor Amaechi’s untiring zeal in raising healthcare in the state through the sustenance of the free medical healthcare, construction of over 60 health centres and equipping of hospitals. 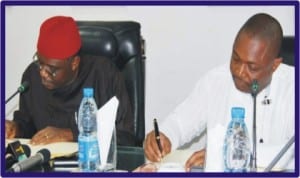 Minister of Health, Prof. Onyebuchi Chukwu (left), with Rivers State Commissioner for Health, Dr Sampson Parker, signing a Memorandum of Understanding (MoU) between the Federal Ministry of Health and the Rivers State Government on Bulk Purchase of Auto-Disable Syringes in Abuja, yesterday

Shouts Of The Pocket …Or Pure Executive Power Play?

Ministers Not Loyal To Jonathan –Clark