Rivers State Governor, Rt. Hon. Chibuike Amaechi, has disclosed plans by the state government to build two new golf estates in the State to strengthen the game of golf and other sporting activities in the State.

Governor Amaechi who made the disclosure when he played host to  the President and the executive members of both the Port Harcourt Club 1928 yesterday at Government House said the project was part of plan to promote the game of golf and other sporting activities.

Governor Amaechi said, “the Rivers State Government is developing two new golf estates, one in the new Greater Port Harcourt City and another at the area around the Dr Peter Odili Roundabout”.

According to him, the aim is to encourage the people of the State to come out of their homes and participate in such recreational activities as playing or watching golf among other sporting activities.

Governor Amaechi reiterated the resolve of the state government to strengthen sports development in the state, saying, it would promote micro-economic activities as people would go into small and medium scale enterprises to cater for the needs of sports enthusiasts.

He congratulated the Port Harcourt Club especially the Club’s golf section for winning the Rosebowl Golf Tournament played in the state recently.

It would be recalled that Governor Amaechi, who is the Honorary Grand Patron of the Port Harcourt Club teed off the golf tournament.

Speaking earlier, the President of Port Harcourt Club, Sir Golden Tamuno commended the efforts of the Amaechi-led administration in the State in the area of sports development.

“It is obvious but it should be stated that you (Governor Amaechi) have done so much for sports development in Rivers State, since you came in as Governor a lot have been done to encourage sporting activities in Rivers State.

Speaking in a similar vein, Captain of the Golf Section of the Port Harcourt Club, Mr Ngere Abere also lauded the efforts of the state government in sports development.

The golf captain assured that the golf section together with the Port Harcourt Club would collaborate with the Rivers State Government to bring back the Annual Governor’s Golf Cup Tournament in the state. 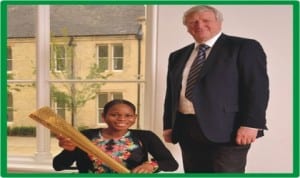