Former President, Olusegun Obasanjo and ex-military ruler, Ibrahim Babangida, who have been rivals in the past, said in the statement that the killings had become “unbearable” and had led to a nation “gripped by a regime of fear”.

“Unfolding events in our dear motherland, Nigeria, over the last few years, are threatening to unravel the nearly a century old labour of our founding fathers and subsequent generations in building a strong, united, peaceful nation …,” the statement said.

Without mentioning Boko Haram by name, they called for “community involvement” in addition to security measures to resolve the crisis, urging efforts from local governments, religious leaders and grassroots organisations.

“Religious leaders, in particular, have an even greater challenge to use the immense virtues of this holy period (Ramadan) to inculcate among the millions of citizens the spirit of mutual respect, humility and forgiveness,” the statement said.

“Ample opportunities are therefore at hand to bring all armed belligerents to table for meaningful dialogue with the authorities for our future and that of our children and grandchildren,” they said.

The statement also said that “for us, and we believe for millions of other Nigerians, the continued unity of this nation is not only priceless but non-negotiable.”

The Tide recalls that the insurgency has been focused in the mainly Muslim north in Africa’s most populous nation and largest oil producer.

The 160 million population is roughly divided between a mostly Muslim north and predominantly Christian south.

While Muslims have often been the victims of Boko Haram attacks, recent violence specifically targeting churches has raised fears of reprisals and wider conflict.

Obasanjo, president from 1999 to 2007, is a Christian from the country’s southwest, while Babangida, who ruled from 1985-1993, is a Muslim from central Nigeria. 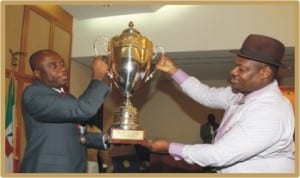