Twenty four hours after the Rivers State Governor, Rt Hon Chibuike Rotimi Amaechi denied knowledge of outrageous fees being charged applicants for the 10,000 teachers jobs, pockets of condemnations have continued to trail the recruitment exercise in the state.

Reacting to the issue on a live programme organised by Radio Port Harcourt last Wednesday, Governor Amaechi had said he was not aware of the directive by the Ministry of Education to applicants for employment to procure scratch cards with the non-refundable fee of N1,200 at any Zenith Bank branch in Port Harcourt but stopped short of reversing the process.

However, thousands of applicants to the 10,000 teachers jobs in the state have described the N1,200 online registration directive by the Ministry of Education as another form of exploitation of the masses.

Some of the applicants, who spoke to The Tide at some of the branches of Zenith Bank in Port Harcourt, queried the rationale behind the online registration order in view of the fact that some of them might not get the job after all.

An applicant, who spoke to The Tide under condition of anonymity, said that the situation had added extra burden on them as some of them had to borrow money to purchase the scratch cards.

However, Nkiri Amabo, another applicant said although her name was shortlisted and she was able to buy the scratch card with N1,200, the cyber cafe she went to process her registration also charged her another N1,500.

According to an applicant from one of the local government areas, some of them who had no relations in Port Harcourt, had to sleep under  flyovers to enable them by the scratch cards.

The applicants urged the state Governor, Rt Hon Chibuike Amaechi to reverse the decision by making the registration exercise free and less burdensome.

It would be recalled that a statement by the Permanent Secretary, Ministry of Education, Mr Richard Ofuru, had directed the shortlisted applicants to  register for the examination online by obtaining a scratch card with a non-refundable fee of N1,200 at any Zenith Bank branch in the state.

Also reacting to the development, Director, Institute of Human Rights and Humanitarian Law, Mr Anyakwe Nsirimovu condemned the idea of scratch cards, saying it was an extra bundren on the applicants that had not been  engaged by the state government.

The Universal Basic Education Board (RSUBED) has denied knowledge of the situation.

A board member in the commission told The Tide that the Governor, Rt Hon Chibuike Amaechi mighty not even be aware of the situation.

However, efforts to reach the Commissioner for Education, Dame Alice Nemi and the Permanent Secretary, Richard Ofuru proved abortive as they were alleged to be out of office.

However, a senior staff in the office of the Permanent Secretary said the examination was only for teaching staff while that of non-teaching staff would be conducted later.

The staff, who pleaded anonymity, also said out of the 60,000 applicants whose names were shortlisted, only 10,000 persons would be ultimately taken.

He said the written examination would be devoid of any political influence or godfathrism as all applicants would be given fair treatment, adding that a consulting firm was handling the exercise. 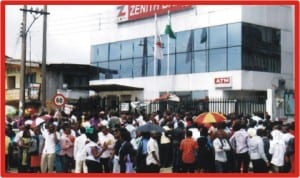