The Rivers State Government, has warned of an imminent flooding in Port Harcourt and its environs, if the current trend in the dumping of refuse into gutters and drainages by residents is not stopped.

The Commissioner for Environment, Dr Nyema Weli, who disclosed this at the weekend while monitoring this month’s environmental sanitation exercise in Port Harcourt and Obio/Akpor, also warned of attendant health consequences.

Dr Weli said that the situation requires a change of attitude by residents of Port Harcourt and its environs.

‘We as a people, whether as an individual or corporate citizen, we need to play our role. We need to handle our refuse , put it in a proper  bin. Take it to a proper location, that the  Sanitation Authority can evacuate it.

‘When you dump it in a drainage, the consequences are that when it rains, the water will not flow”, he said.

The commissioner, however, said that government would not fold its arms while people continue to block drainages as well as build on water right of way, stressing that the ministry would liaise with the relevant authorities to check the trend.

He also stressed the need for regular sanitation and cleanliness by residents of the city, while efforts would be made to extend the campaign to all  parts of the state.

On his part, the chairman of Obio/Akpor Local Government Council, Hon Timothy Nsirim said that sanitary inspectors must take their job seriously by moving round communities to check sanitation defaulters.

Hon Nsirim also said that local government councils must be legally empowered to arrest sanitation defaulters in their respective areas. 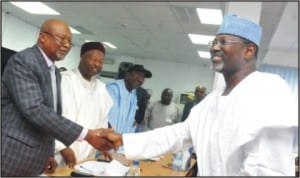 Dolphins Target Away Victory In Owerri