Senate’s Joint Committee probing the management of fuel subsidy, has directed the Nigeria National Petroleum Corporation(NNPC) and the Central Bank of Nigeria(CBN) to work out modalities for the closure of all foreign accounts into which proceeds of the sale of the nation’s crude oil are paid before being transferred to the Federation Account.

At its final sitting, yesterday , the committee chaired by Senator Magnus Ngei Abe resolved that the accounts were in breach of Section 80(4) of the Constitution, and therefore remains illegal.

A controversy about who manages the JP Morgan account had raged between CBN and NNPC, as they both denied being in control of the account.

The Group Executive Director, Finance of the NNPC, Mr. Bernard Oti, while appearing before the committee yesterday, said the corporation had no relationship with JP Morgan, insisting that the account was under the custody of the CBN.

According Oti, the corporation only operates a domiciliary account with the CBN, while the bank could operate such account with its corresponding bank off shore.

His words, “going by the records, the account was opened by the CBN in the last quarter of 2002. All correspondence and mandates relate only to the CBN.

“But the NNPC operates a dollar denominated account with the Central Bank and has no relationship with JP Morgan.”

Oti insisted that NNPC was not in any way a party to the transactions relating to the JP Morgan account, “even in the eyes of the law,” adding that the CBN is the signatory to the foreign account.

The committee was really shocked by this revelation , given the CBN’s testimony that it knew nothing about the account, and that the NNPC was solely responsible for the management of the account.

Newly appointed Group Managing Director of NNPC, Mr. Andrew Yakubu, in his response to the controversy, informed the committee that the corporation was amenable to any changes that was proposed by the National Assembly in moving the oil sector forward.

Chairman of the committee, Senator Magnus Abe, maintained that the CBN and NNPC must work together to close the illegal accounts.

Abe noted that it did not matter how long the practices had been; “we have to get the NNPC and CBN to come out with ways of correcting them.”

A member of the committee, Senator Bernard Ayade, recommended that while the accounts should be closed, those who perpetrated the illegality should be identified and punished. 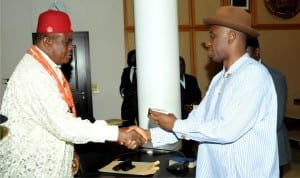