The Chairman, House of Representatives Committee on Sports, Hon. Godfrey Gaiya,  has said that the committee would bridge the funding gap between the country’s female and male national football teams.

He stressed that after all, the female national teams have also won glory for the country.

He said: “they have brought glory and happiness to Nigeria; as we are talking now all the female teams have qualified for one competition or the other.

“The Falcons have qualified for Equatorial Guinea 2012; we have Nigeria’s Falconets going to Japan and we have the U-17 team, the Flamingoes also going to Azerbaijan; so it means that the three female teams have done exceedingly well.’’

Gaiya said that the committee would ensure that both the male and female players of the national teams received the same allowances, stressing that what was important was for them to give their best to the country.

“What we are trying to do as a committee is to see how we can bridge the funding gap between the male teams and the female teams.

“It is hard to hear that the male teams sometimes are paid more than 10,000 dollars for a match while the female team hardly gets even one thousand naira for winning.

“So we must bridge that gap and make the nation to know that whether we get glory from the men or from the women, football is football.’’

Gaiya added that the committee would remain committed to the development of sports in the country and that sports could be used to generate employment for Nigerians.

The chairman also said the committee would take appropriate steps to ensure that the sports sector was developed by providing adequate funding for facilities upgrade and grassroots development. 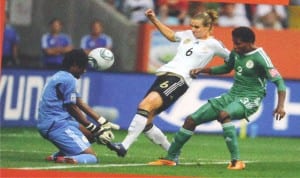