Palpable fear and panic gripped motorists in Port Harcourt, the Rivers State capital, yesterday, as speculations of imminent increase in the pump price of fuel from N97 to between N105 and N141 per litre by the Federal Government, spread like wide fire.

At most of the filling stations visited yesterday, motorists were seen clustering around the few pumps dispensing product. Also in some of the stations only one pump dispensed Premium Motor Spirit (PMS) to desperate customers.

The Tide investigations show that some pump attendants were actually selling fuel at N105 per litre even as the official pump price remains N97 per litre while motorists struggled to fill their tanks.

At one of the filling stations, a pump attendant told a customer to buy more than the quantity he wanted if he had the money as there would be an increase in fuel price within the week.

At another filling station, a fuel attendant who was responding to The Tide question on the rationale behind the long queues of vehicles at the station, simply said, “this is how we see it.”

Although there were long queues of vehicles, some of the filling stations still dispensed fuel to motorists at N97 per litre while those with jerry cans purchased the product at N105 per litre.

Most of the people seen at the filling stations struggled to fill their jerry cans even at N105 per litre with the intention of reserving same for the imminent days of scarcity of the product.

Although there has been no official pronouncement, the Federal Government had before now proposed to further increase the pump price of fuel, to enable it meet budgetary provisions.

But in the last one month, there have been mounting pressures in some quarters on the government to rescind the decision as Nigerians are still suffering the effects of the fuel subsidy removal on January 1, 2012, which had pushed the pump price of fuel to N141 per litre.

The Tide learnt that some filling stations at the Wimpey axis of Port Harcourt have already started selling the product at N105 per litre.

The Tide also gathered that tanker drivers under the aegis of the National Union of Petroleum and Natural Gas Workers (NUPENG) are threatening a strike action should the Federal Government attempts to hike the price of fuel.

They expressed displeasure that the government has concluded plans to increase the pump price of fuel against the advice of the union, saying it would be wrong for the government to go ahead with the full deregulation of fuel when their initial demands for functional refineries, depots and trucking roads have not been addressed.

Efforts to extract comments from NUPENG officials proved abortive as at the time of going to press. 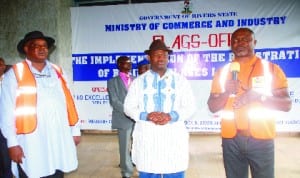 Rivers State Deputy Governor, Engr Tele Ikuru (middle) listening to a speech by the Commissioner for Commerce and Industry, Mr Chuma Chinye at the flag-off of the Implementation of the Registration of Business Premises Law in the state, last week. With them is the Permanent Secretary of the Ministry, Sir Awoye H. Bob-Manuel.