The Joint Military Task Force (JTF), has destroyed 802 illegal refineries, and impounded 21 vessels, 293 Cotonou boats and surface tanks with total capacity of 17, 501, 320 litres of petroleum products while 86 suspects were arrested.

Making the disclosure while briefing journalists in Yenagoa, the Bayelsa State capital, the Commanding Officer, JTF responsible for checking illegal bunkering and crude oil theft in the Niger Delta, Maj-Gen Johnson Ochoga, said the command had also lost five officers since it was transmuted from “Operation Restore Hope” to “Operation Pulo Shield.”

The commanding officer indicated that the JTF was living up to expectations in the discharge of its mandate, adding that one of the major challenges facing the command was the more daring affront and sophistication of crude oil thieves whom he said had  also devised various means of beating security operatives through their vast knowledge of the creeks.

The Tide reporter quotes the commanding officer as saying that in a bid to check this trend, a directive had been given to all vessels, barges and small boat owners to register them with the command before the second week of July.

According to Ochoga, “the transmutation not only occasioned the expansion of the area of responsibility to cover the nine oil producing states but also brought on board, beside traditional security agencies, other civil organisations such as the Economic and Financial Crimes Commission (EFCC), National Maritime Administration and Safety Agency (NIMASA), Nigerian National Petroleum Corporation (NNPC) and Nigerian Ports Authority (NPA), among others.”

He explained that the JTF had created two dedicated mobile telephone numbers for the public to volunteer information to the task force that could lead to the arrest of crude oil thieves and subsequent containment of the scourge of illegal bunkering and other related activities in the region, and gave the numbers as: 08032202684 and 08075265526.

Ochoga, therefore, solicited the support and cooperation of Nigerians, especially those from the Niger Delta to help in the renewed efforts to stamp out illegal bunkering in the region.

Barely 24 hours before President Goodluck Jonathan’s departure to Belgium,  to deliver an address at the Summit of World Customs Organisation in Brussels, tomorrow, the Nigerian Navy has confirmed the arrest of a Belgian ship, MT St Vanessa and her crew for alleged involvement in illegal oil bunkering in Bayelsa State.

The navy said the ship was arrested off the Brass/Akassa coast in Brass Local Government Area of Bayelsa State.

Parading the crew members before newsmen in Yenagoa on Monday, the Flag Officer, Central Naval Command, Rear Admiral Johnson Olutoyin, said the vessel had 15 crew members on board.

He said between June 5 and June 18, the command’s Regional Maritime Domain Awareness Centres (RMAC) at the  coastline, spotted the vessel loitering aimlessly off the Akassa/Brass area, notorious for illegal bunkering and crude oil theft.

He said the MT St Vanessa, was reported to have departed Lome Port on June 5  and arrived at Akassa area on June 6 without any authority from Nigerian Ports Authority,  NIMASA or the Nigerian Navy, to enable it to operate on the Nigerian territorial waters.

“The vessel moves towards Brass/Akassa in the night and moves back into the deep ocean in the hours of the day as indicated on the RMAC print out attached.

“Consequent upon these observations, the vessel was deemed “as a vessel of interest” and a naval ship, NNS Zaria, was dispatched to intercept and arrest her.

“On Tuesday, June 19, 2012, at about 1520, NNS ZARIA intercepted the vessel and interrogated her. As the vessel could not give any reason for her suspicious movement in our waters, the naval ship intimated her she was under arrest.

“MT St Vanessa blatantly refused the arrest and instead decided to speed off. NNS Zaria commenced a hot pursuit and after about three hours, was eventually able to effect the arrest of the vessel. 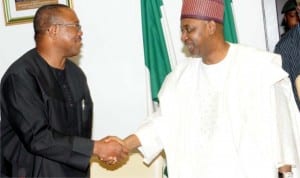 Vice President Namadi Sambo (right) in a handshake with Governor Peter Obi of Anambra State, during a committee meeting on Mass Transit at the Presidential Villa in Abuja, yesterday

Jonathan Sacks NNPC Board …As Senate Summons Okonjo-Iweala, Others