Vicente del Bosque says Portugal star Cristiano Ronaldo must be neutralised if Spain are to continue the defence of their European crown.

The Real Madrid forward has stamped his authority on Euro 2012 scoring three goals, including one in the victory over Czech Republic, on the way to securing his side’s presence in Wednesday’s semi-final against Spain in Donetsk.

Although Del Bosque stressed that Paulo Bento’s side were more than just a one-man team, he admitted special attention would be paid to quelling the threat of the 27-year-old, who scored an astonishing 60 goals last season in all competitions.

“We have to try to deactivate him. We played against him at the last World Cup and we showed we knew how to stop him,” said Del Bosque, whose team beat Portugal 1-0 in the round of 16 in South Africa two years ago.

“We will start with who we trust and of course we have to take notice of Ronaldo. He’s an excellent player and it is logical there is so much talk about him. He plays in Spain which is also a factor.

“We will just be ourselves but of course we have to pay attention to certain details of the opposition but it’s important to play our own game and develop our own ideas.”

Should Del Bosque select Alvaro Arbeloa at right-back, as he has done so throughout the tournament, the Real Madrid defender will come face-to-face with his club colleague.

Arbeloa, who returned to the Bernabeu in 2009, admits facing one of the world football’s stellar talents will represent the most daunting challenge of his career, but one he feels he is capable of handling.

“No, I haven’t spoken to Ronaldo yet but I will probably will on the day of the game,” he said.

“But I don’t know who is going to play or know the starting line-up. If I’m lucky the coach will pick me and I will be up against Ronaldo. We know his level is high, he is a very demanding opponent, he is confident but we will try to stop him.

“You have to be prepared mentally and physically especially against him. He is one of the best players in the world. It is important to be at the top of your game.

“You cannot stop him for 90 minutes but it’s a beautiful challenge for me. I like to be measured against the best players and this is a great test.

“It’s not easy to stop Ronaldo and everyone knows he’s scored three goals and played really well. But we know Portugal is not only Ronaldo.

They have Nani who is playing well and lots of others with quality. We have to stop all of them not only Cristiano.” 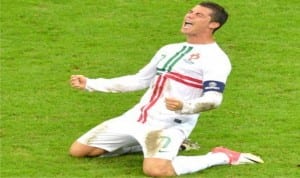 ‘Jonathan Must Appear Before Reps’ …Senate Orders Arrest Of Marna, Others