The embattled former chairman of House of Representatives ad – hoc Committee on fuel subsidy regime, Farouk Lawan, on Thursday said he would be vindicated at the end of his trial.

Lawan, who walked into the House chamber for Thursday’s plenary session chatted briefly with other lawmakers before leaving the Assembly premises.

The lawmaker, who first appeared as if he was not in the mood to speak with journalists who were trailing him however changed his mind and said philosophically that “this is my own trying times but I will come out vindicated at the end of the day.

He said he has no grouse against his colleagues in the House, pointing out that it was an institutional decision aimed at deepening the country’s democracy.

“Whatever decision is taken by the House, I believe is meant to ensure the credibility of the institution because as members, we must at all times recognize that the institution is bigger than each and everyone of us.

“It is an institution that belongs to this country, the organ that Nigerians look up to for legislation, oversight responsibilities and for responsive representation.

“It is an institution that must continue to give hope and confidence to the Nigerian people. So, whenever any issue calls to question any particular member, it is important to recognise that the institution itself is bigger than anyone of us,” Lawan added.

While he maintained his respect for the decision of the House, Lawan implored Nigerians not to judge him hurriedly until the matter is concluded.

“I have absolutely no problem with that decision. As far as the issue relating to me is concerned, I believe ultimately, I will be vindicated.

“I just urge Nigerians to continue to be patient, I have not spoken on the issue for strategic reasons, but I believe in the end Nigerians will come to believe and see that for the 13 years that I have invested in championing good governance, responsibility and probity in this country that this trial is  from God and I believe in the end we shall prevail.”

Meanwhile, the police, has warned that there was no amount of stampeding that would make them carry out shoddy investigations into the $620,000 bribery allegation against the erstwhile chairman of the House of Representatives Ad Hoc Committee on Fuel Subsidy Regime, Farouk Lawan.

The force spokesman, CSP Frank Mba, gave the warning while speaking to newsmen in Abuja.

According to him, “we will do a thorough job before coming out with any report, so that no one can fault our investigations into the matter.”

On the House’s investigation into the matter, Mba said that this had nothing to do with the police, as they were working on their own and that would not jeopardise police’s investigation. 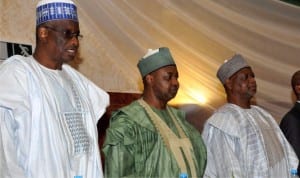 Vice President Namadi Sambo (middle) flanked by Head of the Civil Service of the Federation, Alhaji Isa Bello Sali (right) and Minister of Defence, Alhaji Bello Mohammed, at a stakeholders' workshop on the civil service in Abuja, yesterday.

questions on whether the members of the ad hoc committee on fuel subsidy regime had reported to the police, the force spokesman said that he was not aware if they had been invited, but stated that whenever detectives invited them they would have no choice but to report.

Mba noted that the way the matter was being reported in the newspapers had not assisted them in the investigations but was rather jeopardising it.