Vehicular and human movement within the Oyigbo axis of the Port Harcourt/Aba Expressway was yesterday disrupted following the blockage of the major road by tanker drivers, causing heavy traffic jam and chaos in human activities.

When The Tide visited the scene, commuters were spotted trekking long distances to get to their destinations following the incident.

The Tide learnt that the blockage may not be unconnected with an earlier disagreement between a tanker driver and JTF operatives.

As at the time our reporter visited the area, most of the tanker drivers had left the area, abandoning their vehicles on the major road.

However, few tanker drivers, who spoke with our correspondent referred him to the leadership of the body

When contacted on phone, the Chairman of the Tanker Drivers Union, Port Harcourt, declined comment on the issue.

Commenting on the situation, the Press Secretary of Oyigbo Local Government Area, Mr Bobby Oforji, lamented the situation , stating that Oyigbo residents and other users of the road had suffered untold hardship following the activities of tanker drivers.

He said the chairman of the local government , Hon Felix Nwaeke was deeply concerned about the matter, and was making moves to meet with the tankers drivers union to address the issue.

Some passengers and motorists who spoke with our correspondent, decried the excruciating conditions faced by people due to the gridlock.

A motorist, Mr Saturday Asuquo, said the situation was so bad that the only way for drivers to meet up with lost man-hour was to increase transport fares.

A resident of Oyigbo, Grace Ibe, who spoke with The Tide, expressed deep sense of bitterness over the situation and called on government to intervene in the matter and save people from further suffering.

However, explaining the reason for the impasse, the 2 Brigade Command of the Nigerian Army, Port Harcourt, yesterday said that 14 truck drivers had been arrested for operating  “at odd hours”.

The command’s spokesman, Captain Sunny Samuel said in Port Harcourt that the drivers were arrested at Iriebe, Port Harcourt between 12.15am and 5am.

He said attempts by men of Nigerian Security and Civil Defence Corps to search and verify the genuineness of the products were resisted by the drivers.

Samuel said that truck drivers, in solidarity with their arrested colleagues, parked and abandoned  more than 50 trucks along the Port Harcourt/Aba Expressway, thereby causing heavy traffic.

“Most of the drivers are suspected to be carrying illegally refined diesel, they will need to present their documents for verification”, Samuel said.

The command’s spokesman called on truck drivers to respect standing orders and other laws of the land in the course of their duties. 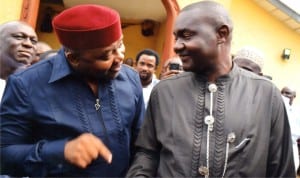 Special Adviser to the President on Technical Matters, Nze Akachukwu Nwankwo (left), conferring with the Senator representing Rivers South-East, Senator Magnus Abe, during a prayer session for the implementation of the UNEP report in Ogoniland at Bori, last Sunday. Photo: Chris Monyanaga