European Champions League winner, Chelsea FC of England has targeted Nigerian international, Victor Moses as one of the new players to bolster their squad for next season.

Moses, who helped Super Eagles of Nigeria prosecute the recent 2014 World Cup and 2013 African Cup of Nations qualifiers was in impressive form for Wigan Athletic and spearheaded their Premier League survival last season.

Tidesports learnt that Coach Roberto Dr Matteo, who was last week given the Chelsea job on permanent basis fancies Moses as part of his squad as he tries to freshen up the Blues.

To this end, the Stamford Bridge side has reportedly made a four million pound bid for the young player.

However, Wigan Athletic chairman Dave Whelan has said that Chelsea was ‘taking the mickey’ in their attempt to poach winger Victor Moses.

Whelan slammed the Champions League winners for trying to lure Moses, who has just 12 months remaining on his deal at the DW Stadium.

The Nigeria international joined Wigan from Crystal Palace in 2010 but has stalled on discussions to extend his contract.

“Chelsea would need to get realistic before we would even listen to them. They made a bid at 6pm last night and we turned it down flat,” Whelan told Tidesports sources, yesterday.

“Roberto Martinez has brought this player on and he needs at least another year with Roberto to become a top player.

“We have offered him a new contract but it seems the agent, more than the player, wants to move him on, at least that is the impression we are getting.

“It cannot be for the player’s good. Victor Moses needs another year or two before moving to a club like Chelsea. He needs games and he won’t be first choice at Chelsea, I wouldn’t have thought.

“We don’t need to sell him with 12 months to go on his contract because he is under 24 so wouldn’t be going on a free transfer.

“Ideally we would like him to sign a new contract, or a club like Chelsea would have to be realistic. At the moment, they are taking the Mickey with the bid they’ve made.” 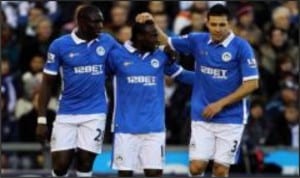