The Federal Government, has backed the bid by the Rivers State Government for the designation of Port Harcourt City as the 2014 World Book Capital city of the year by the United Nations Education Scientific and Cultural Organisation (UNESCO).

Port Harcourt, the Rivers State capital is among eleven other cities across the world bidding to be designated the World Book Capital of the year, 2014.

In a letter to the selection committee, World Book Capital City, UNESCO Division of Arts and Cultural Enterprise, Paris, France, a copy which was made available to newsmen during a press briefing in Port Harcourt, the Federal Government said that it was pleased to support the bid for Port Harcourt to be designated the  World Book Capital  City in 2014.

The letter signed by the Special Adviser to the President on Strategy and Research, Dr Oronto Douglas who was represented by Miss Molora Wood at the briefing, said that the designation of Port Harcourt as the World Book Capital City 2014 would boost the President’s “bring back the book campaign” which is part of government ‘s programme to bring  back the culture of reading among Nigerians.

In her speech, the Rivers State  Commissioner for Education, Dame Alice Lawrence Nemi said that the briefing was a testimony of the huge investment made by the state government in reviving reading habit among Rivers people.

“As a model for education in Africa, we have succeeded in making education free and compulsory in the state.

“Right now, the state has made available free books to all Rivers people, both in urban, rural areas. She further said that the government had through the Ministry of Education transformed the adult education programme across the state, while books were now provided for everyone in the state”.

Personalities at the briefing include the Country Director/Representative of UNESCO, Dr Joseph Ngu, Dr Gabriel Okara, Oluwafiropo Ewenlu of Pen International Nigeria amongst others. 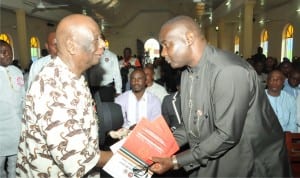 Senator, representing Rivers South-East Senatorial District in the National Assembly, Senator Magnus Abe (right) in a handshake with Chairman, Rivers State Council of Traditional Rulers, King G.N.K. Gininwa, during a special prayer session for the implementation of the UNEP report on Ogoniland in Bori, yesterday.

Cacophony As Defence …That Bribe Allegation Against Lawan