The Economic and Financial Crimes Commission (EFCC), on Wednesday tendered two sets of documents in the prosecution of Dr. Shaibu Sani Teidi and two others, who are being tried before Justice Adamu Bello of the Federal High Court, Abuja over a N2billion fraud.

The two others under prosecution for defrauding the Nigerian Union of Pensioners (NUP) are Alhaji Ali Abatcha and Elder Actor Zal.

The two prosecution witnesses, Mr. Njoku Everest, Assistant General Secretary of the Union and Mr. Chikezie Aguocha, an official of First Bank of Nigeria were led in evidence by Emmanuel Nonso Egwuagu from Godwin Obla’s Chambers at the resumed hearing of the case.

While Everest tendered documents concerning total expenditure that was incurred by the union based on the money that came into the union’s account between April 2008 and March 2011, Aguocha, who was subpoenaed on May 10, 2012, also produced seven documents, which include statement of account of the NUP domiciled at the Garki branch of the bank, statement of account from the date it was opened to December 31, 2011 as requested, account opening forms, mandate cards and reference forms and account update form. Also tendered before the court, was the payment instruction/instrument of the account within the stated period.

Dr. Shuaibu Sani Teidi, Alhaji Ali Abatcha and Elder Actor Zal were alleged to have at various times, between 2008 and 2011 conspired to defraud and obtain from the Pensions Department, Office of the Head of Service of the Federation of Nigeria, various sums in the aggregate amount of over N2bn.

Dr. Teidi, while in the Pensions Department, Office of the Head of Service of the Federation of Nigeria, allegedly used his position to overpay the check-off dues to the NUP, which in turn returned the excess payment to Dr. Teidi.

In the proof of evidence presented before the court, Elder Zal had in his confessional statement to EFCC alleged that various sums of money were paid to Dr. Shuaibu. Zal said the NUP received N60, 958,850.48 on April 23, 2009. Of the amount, N20 million was given to Dr. Shuaibu as kick back.

According to Zal, the reason Dr. Teidi gave for his demand was for onward distribution to the Permanent Secretary, Head of Service, Accountant-General office, National Assembly and EFCC to facilitate smooth payment of monthly pensions to the pensioners.

After cross-examination of the prosecution witness by the defence counsels, led by S. I Ameh, the court adjourned the case till October 16, 2012. 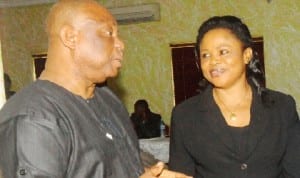