As the House of Representatives resumes today for a special emergency session to take a decision on the $3 million bribery scandal involving Chairman of the ad hoc committee that investigated the management of the oil subsidy, Hon. Farouk Lawan, The Tide gathered that Speaker Aminu Waziri Tambuwal has concluded plans to sack the embattled chairman in order to save the House from further embarrassment.

Tambuwal is reported to be angered by the antics of Lawan, who refused to confide in him even up till the eleventh hour.

The House, which had gone on recess last Wednesday to resume on 19th June has been compelled to reconvene today to clear air on the bribery saga.

“This is to inform all honourable members of the House of Representatives that the House would reconvene to hold a plenary session on Friday 15th June at 10am prompt,” a statement issued Wednesday and  signed by the Clerk, Alhaji Mohammed Sani-Omolori said.

The Tide can confirm that the leadership of the House has been holding series of meetings since the bribery allegation became public and has decided to convene the emergency plenary to take a stand.

A highly placed source told newsmen that the leadership could not wait any longer for next Tuesday’s reconvention as the scandal was capable of causing disaffection in the lower chamber.

“We took the decision to reconvene and let Nigerians know that we are not supporting corruption but are most interested in moving the nation forward. The matter is generating too much attention and we are concerned just like other Nigerians,” our source said. “Everybody is pained and we feel the best thing to do at this time is to take a decision at the plenary.”

The source, who opted to remain anonymous further disclosed that the House would relieve Lawan of his chairmanship of the ad hoc committee because the scandal has cast a big integrity question on his person, the House and the committee as a whole. He promised that the House, in line with its legislative agenda, would not shield any member that indulges in corrupt practices.

Speaking further, the source disclosed that the Speaker, who learnt about the illicit deal during his visit to Chief Olusegun Obasanjo, summoned Lawan to a meeting with principal officers, on his return. But Lawan maintained that he was innocent until Tambuwal met again with him privately and told him about the existence of a video and recording.

Meanwhile, Deputy Speaker, Hon. Emeka Ihedioha is also under fire, as his name has been mentioned by certain sections of the media in connection with the bribe, considering the manner with which he invited Lawan to make an amendment to recommendation number 27, which indicted Zenon Oil.

Our correspondent  has however gathered that Ihedioha may have acted innocently as under the Rules of the House, consideration of committee reports is usually presided over by the deputy speaker as chairman of the Committee of the whole

During such consideration, the chairman of the committee whose report is being considered is often recognised by the presiding officer to make clarifications, further explanations and amendments as the case may be especially when and where questions are raised by honourable members.

Furthermore, the chairman in seeking to make clarifications or amendments as the case may be is sometimes asked to approach the chair and confer with the presiding officer to elucidate on some issues. This is normal and standard parliamentary procedure.

It is therefore completely within the rules of the House and parliamentary procedures for the presiding officer to have allowed chairman of the ad-hoc committee on the management of fuel subsidy to make clarifications and amendments during consideration of the report as witnessed, one source familiar with House rules told The Tide. 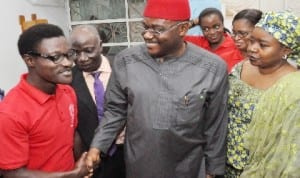 Cacophony As Defence …That Bribe Allegation Against Lawan