Residents of Rivers  State, last Friday began to experience fuel scarcity with its attendant long queues of vehicles as the Port Harcourt zone of the National Union of Petroleum and Natural Gas Workers (NUPENG) embarked on strike.

This is coming on the heels of the Ministry of Urban Development’s action to drag eleven tanker drivers of the union to court over refusal to park their vehicles at authorised places as directed by the government.

The accused persons were arraigned at a Port Harcourt Magistrate Court for  blocking the Abonnema Wharf Road with their tankers despite series of warning by the state government.

One of the drivers, Mr Uzoma Apere told the court that he was assaulted by an officer of the Nigerian Army while on operation to enforce the directives of the state government.

The accused persons were arrested during an  inspection of joint taskforce of the Rivers State Environmental Sanitation Authority and the Ministry of Urban Development.

The Tide reports that the Presiding Magistrate, Mr Alatoru Fubara, in his ruling granted  bail to nine of the accused persons in the sum of N200,000 each on the fourth count charge of illegal obstruction and breach of the peace.

The other accused person, Uzoma Apere was granted bail  with the sum of N250,000 on a second count charge of assault, while the magistrate adjourned the case to 20th of this month for further hearing.

Consequently, the leadership of NUPENG instructed its members to stop distributing and supplying petroleum products to filling stations resulting in price increase of fuel.

Although, the pump price remains at N97.00 the filling stations sold above the pump price, cashing in on the strike while black market dealers had  a field day selling at exorbitant price of between N4,000 and N5,000 for 20 litres.

Reacting to the NUPENG strike, the Press Secretary of the Ministry of Urban Development, Mr Benneth Kalio told The Tide that the union had no legal backing to continue with the strike until the 20th of this month which is the adjournment date for the their case, saying that the strike was  an arm twisting measure.

The Independent Petroleum Marketers Association of Nigeria (IPMAN), in its comment, said the  rate of obstruction and accident caused by petroleum trucks on the highways would be checked if marketers load in their geo-political zones.

IPMAN, through its Secretary, South-South zone, Adebisis Bada, stressed the need to make NNPC  depots across the country more functional, adding that the regulation would help save lives and property, if all the depots were working.

He urged the Federal Government to upgrade the existing infrastructure in the oil and gas industry to reduce the high rate of petroleum explosion which he said was claiming the lives of innocent people.

The leader of Abonnema Wharf community, Comrade Somiari George in an interview appealed to the state government to dualise the Abonnema Wharf road to ensure free flow of traffic since it has become a channel for tankers loading fuel imported into the country. 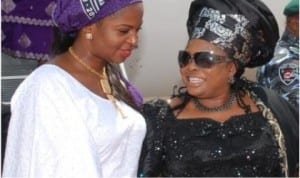 Wife of the President, Dame Patience Jonathan being welcomed by the wife of Enugu State Governor, Mrs. Clara Chime at the Akanu Ibiam International Airport Enugu on her way to Mpu, last Friday, for the burial of Igwe Matthias Ekweremadu, the father of the Deputy Senate President ,Ike Ekweremadu. Photo: NAN