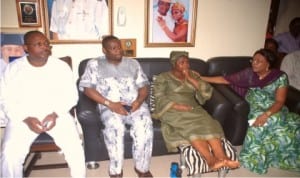 The Joint Committee on Finance, Petroleum Resources Upstream, Downstream and Gas Committees of the House of Representatives, has asked the Nigerian National Petroleum Corporation (NNPC) to refund N3.098 trillion to the Federation Account.

The amount is the total under-remittance to the account between 2004 and 2011.

Besides, the NNPC Group Managing Director, Mr. Austin Oniwon, is to apologise to the House for misinforming it and the country through alleged false claims.

The committee, however, asked the Federal Government to amend the provisions of Section 7 of NNPC Act under which the corporation hides to make direct deductions from the Federation Account.

The panel made the recommendations after an eight-month probe of alleged  N450billion indebtedness of NNPC and the conflict between states and the corporation over direct deductions from the Federation Account.

The report, which has been submitted to the Speaker, Alhaji Aminu Tambuwal, was obtained by our correspondent yesterday.

The House of Representatives had in an unanimous resolution on September 22, last year mandated the Joint Committee on Finance, Petroleum Resources Upstream, Downstream and Gas Committees to investigate NNPC’s indebtedness and liability of N450billion to the Federation Account.

NNPC had earlier acknowledged the liability with Federation Account Allocation Committee (FAAC) and was expected to be making monthly remittances to defray same.

The corporation reneged leading to the failure of FAAC in May, last year to make the required monthly distribution to the three tiers of government.

But the committee said from its findings, NNPC has no right to make deductions from the revenue accruing to the Federation.

It backed the position of the Nigeria Governors Forum (NGF) that NNPC had been illegally having access to the Federation Account.

The panel urged the government to review the concept of “Carry Agreements” with the International Oil Companies (IOCs) in order to reduce corruption and waste.

The committee asked Shell, ELF, Mobil and Chevron to refund $3.675billion being over-bloated claims to reimbursement between 2004 and 2006.

The report said: “NNPC should be sanctioned for taking domestic crude at discounts to itself between 2004 to 2011 to the tune of N248billion.

“The GMD of NNPC, Engineer Austin Oniwon should be sanctioned for lying on oath that NNPC does not take Domestic Crude at discount.

“The GMD of NNPC should be made to apologise to the House and the entire nation for misinforming them through his false claims which were publicised widely in the media through paid adverts.

“NNPC should refund the sum of N3.098 trillion being under remittances to the Federation Account between 2004 and 2011.

The committee highlighted the shoddy management of earnings from oil by NNPC last year.

“From that total exported Federation Crude revenue proceeds of $10.785billion in January to September 2011, out of which NNPC and CBN appropriated $4.490billion to cash call, $3.409billion to Excess Crude Account and made available only $2.392billion for FAAC distribution, there was an unexplained shortfall of $495million.

“These were established from the analysis of CBN, Federation Account Component Statement for the nine months in 2011.

“Further analysis and investigations of the shortfall revealed a similarity between the monthly shortfalls and what was reflected as Cash Call deducted under Gas receipts.

“The dividing line between what is right and what is wrong was found in February 2011, when no such discrepancy was observed.

“Out of the proceeds of $1.327billion that accrued from Gas receipts between January –September 2011, NNPC and CBN allocated $550.7million to Cash Call, leaving a balance of $776.5million for FAAC distribution.

Stench Of A Gargole …That Protest By Airlines Operators