A former Vice Chairman of the NFA, Chief Obinna Ogba, on Monday called for the fortification of the Super Eagles before the next World Cup qualifier against Malawi.

Ogba gave the advice in an interview with newsmen in Abakaliki, while reacting to the team’s 1-0 victory over Namibia on Sunday in Calabar.

He commended Coach Stephen Keshi for fielding some home-based players in the team, but said that the experimentation should be stopped, to ensure Nigeria’s qualification for the 2014 World Cup.

“Nigerians are bad learners of history as it should have been clear to the coach that only the best should be used to prosecute the qualifiers.

“The essence of fielding the home-based was to discover those who would complement the foreign-based players in order to strike the desired balance to achieve optimal results,” he said.

Ogba, the Chairman of Ebonyi State Football Association, said that although the team dominated the match, it lacked the cohesion vital to ensuring the team’s victories in subsequent matches.

He said the few foreign-based players fielded in the match did not shine because they were alien to the the playing pattern of their counterparts from the domestic league.

The Ebonyi FA chief said the imperfect understanding between these two sets of players could be disastrous against a team with more adventurous players.

“It was, therefore, disheartening to see Keshi inviting several foreign-based players only for them to sit on the bench and many not even listed for the match,” he said.

Ogba called for immediate invitation of more established Eagles’ players to add the needed steam and experience into the team, to improve Nigeria’s chances in subsequent matches.

“The immediate invitation would help them blend with the players already in camp, to achieve the needed cohesion.

“Established teams such as Cote d’Ivoire and Ghana recorded wins over the weekend with a correct mixture of new and established players,” the former NFA official said.

Ogba urged Nigerians to be patient with the team and prayed that Keshi succeeded in raising a formidable team for the country.

“The fans should emulate the Calabar crowd who stood by the team until it got its lone goal in the 83rd minute of the match,” he said. 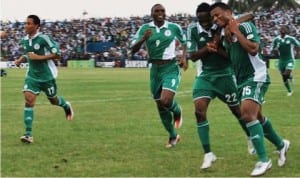 Super Eagles players celebrating their one goal victory against the Brave Worriors of Namibia at the UJ Esuene Stadium, Calabar during the FIFA 2014 Brazil qualifying African zone in Calabar on Sunday

Crisis Brews In Bonny NLNG,Mobil …As The Youth Kick Over Employment List