Rivers State Governor, Rt. Hon. Chibuike Amaechi, has identified power and transportation as key to the transformation of the Niger Delta.

Governor Amaechi made the assertion when he played host to the Senate Committee on Niger Delta led by its Chairman, Senator James Manager on Wednesday in Port Harcourt.

He stated that the advisory body of the Niger Delta Development Commission(NDDC) consisting of governors from the NDDC states had agreed and mandated the agency to pursue these key areas while completing old projects, as a way of utilising the huge funds allocated to the region.

‘“ We sat with the Chairman and the Managing Director and reviewed some of the things they were doing and we came to the conclusion that we are tired of all these six classroom blocks. All these two to three kilometre of roads and we advised that the key to the development of the Niger Delta would be power and transportation’’.

Amaechi decried a situation where most of the region are littered with uncompleted and poorly executed projects, hence, the new drective by the commission’s advisory body to complete old projects and concentrate on power and transportation.

Since all states of the region are naturally linked, the Rivers State Governor said the commission had been advised,’’ to go and do railway that connects all Niger Delta states from Cross River to Edo State’’.

This he believed would drive economic activities in the region, saying, we also said power is even more essential than railway. And currently that we have power in the Niger Delta’’.

Currently, he revealed that the entire region needed about 700 megawatts of power, “they also can invest in power generation and invest in distribution, so that the region can have power ‘’.

Besides, he submitted that agriculture was also very essential but hinted that the area was being championed by the BRACED Commission, “ we think that if you start investing in agriculture, you create employment opportunities and reduce crime’’.

He thanked the committee members for visiting the state, and wished them well in their duties, while challenging them to ensure that the huge funds allocated to the region were maximally utilized.

Speaking earlier, Chairman of the Committee, Senator James Manager intimated the Governor of the aim of the visit saying it was part of its mandate to oversee activities of the commission.

The Delta-born senator recalled that the region had suffered neglect in the past, while assuring that the Committee was poised to reverse the trend, and harped on the need for the various agencies of government to work together in moving the region forward.

Senator Manager also lauded Governor Amaechi for his achievements,” saying, “we are proud of you. Please, keep doing what you are doing’’. 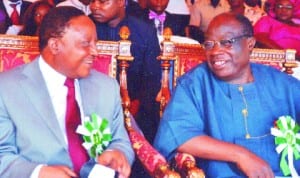 Why Nigeria ‘ll Not Break-Up – Jonathan