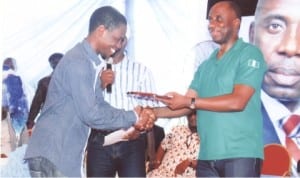 As part of efforts to curb the activities of illegal oil bunkering in the state, the Rivers State Government, has pledged to step up sensitisation campaign on the effect of the environment in all communities in the state.

The Commissioner for Environment, Dr Nyema Weli who disclosed this in a press briefing as part of the activities to mark the 2012 World Environment Day in Port Harcourt, said that the government was working tirelessly to bring to a halt the activities of oil bunkerers in the state.

The commissioner who said that the laws controlling the oil industry were domiciled in Abuja, however, noted that the government would continue to reach out to the people to let them understand why they must stop bunkering.

He said that the government had also set up a special taskforce to contain flooding during the upcoming raining season, noting that towards this end, all major channels and creeks in Port Harcourt  environs were being opened up, and urged residents of the city to desist from further dumping of refuse into water channels and creeks in the city.

According to him, the 2012 World Environment Day which has as its theme: “Greening Economy: Are You Part Of It”  stressed the need for collective efforts by all to check environmental pollution across the state.

Dr Weli emphasised that the event which holds on the 5th of June 2012 will feature number of activities including panel discussions, stakeholders meeting, tree planting exercise and special sanitation exercise.

A press release made available to The Tide in Port Harcourt said that Dr Weli  during a stakeholders meeting in Port Harcourt, said that the task of keeping Rivers State clean was more than what a single ministry could do.

Why Nigeria ‘ll Not Break-Up – Jonathan