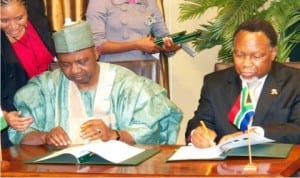 The Head of Service in Lagos State, Mr Adesegun Ogunlewe, said that the government might recall some of the recently sacked doctors.

Ogunlewe made the disclosure in Ikeja at a news briefing to mark Governor Babatunde Fashola’s fifth year in office.

He said some of the sacked doctors had already appealed to the government for a recall, saying, the appropriate authorities were looking into their cases.

“Yes, some of the sacked doctors have appealed to the government.

“The relevant authorities of the Lagos State University Teaching Hospital (LASUTH) and Health Service Commission (HSC) are considering these cases.

“And very soon the results of the appeal will be made public“, Ogunlewe said.

Our correspondent recalls that 788 doctors were sacked on May 7 by the government for failing to respond to queries after embarking on “an illegal strike“.

The doctors, had under the aegis of the Medical Guild, embarked on a three-day warning strike from April 11 to April 13 and subsequently an indefinite strike on April 25 to demand for improved working conditions.

Ogunlewe ruled out a blanket recall of all the doctors, pointing out that LASUTH and HSC would have to determine those who merited re-absorption.

The Head of Service said the government was still in talks with the Nigerian Medical Association (NMA) on ways to iron out the differences.

He said the government sacked the doctors to save the state‘s health sector, stressing that the strike violated the terms and rules of their employment.

Ogunlewe said the strike was not justified, especially as the government had implemented the Consolidated Medical Salary Scale (CONMESS) for doctors in its employment.

The HOS explained that government had not embarked on the employment of workers recently because there was no vacancies for massive recruitment.

“This figure covers those in other services except the local governments.

“Of course recently, the Ministry of Education placed advertisements for teaching positions, particularly in areas of critical needs of our schools,” he added.

Ogunlewe restated the government’s commitment to improving the welfare of workers, saying, a lot had been done to demonstrate that commitment over the years.