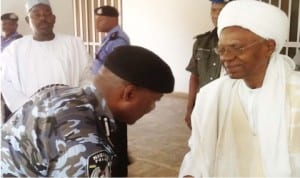 Contract for the construction of the new Abuja-Kaduna railways including consultancy ward has been awarded to the China Civil and Engineering Construction Company, (CCEECC) at a cost of $874,308,704.

Minister of Transport, Senator Idris Umar who made this known in Lagos assured that the nation’s railway sector would be fully resuscitated within the next 25years to enable Nigeria to compete favourably with other countries of the world in the area of railway transportation.

According to him, work had already started with the CCECC achieving over 68 kilometres of earthwork and building of culvert.

The Tide sources said the Federal Government was satisfied with ongoing rehabilitation of the Nigeria Railway Corporation (NRC) system and had already given various works pass mark.

The Nigerian government, Umar further said, had also negotiated a loan of $500 million from the Chinese government at an interest rate of 3 percent and repayable within a period spanning 25 years.

He said “we have about twenty five  years plan to ensure that our railways system is well brought on board and fully resuscitated so that Nigeria can compete favourably in the railway transportation”, adding, countries that have developed all over the world got to that level because of the presence of effective railway transportation system.

On whether the project would be completed during the life span of the present regime considering the near frequent redeployment of ministers, he said “you remember that for decades, the railways have been comatose. And this is the first time that the government has thought it wise to revisit the railways.”

It would be recalled that the Federal Government under the late General Sani Abacha had in 1995 awarded a contract of $40.5m to the Chinese government to rehabilitate the NRC. Works to be done by the China Civil Engineering Construction Company (CCECC) include renewal of signalling system, tracks and bridges, supply of locomotives, coaches and wagons and provision of experts and services.