Acting Inspector-General of Police, Mohammed Abubakar said on Monday, in Ikeja, that 50,000 officers were being trained in intelligence and crime investigation to check the insecurity in the country.

Abubakar disclosed this when he led top police officers on a courtesy visit to Governor Babatunde Fashola of Lagos State, in continuation of his familiarisation tour of police commands in the country.

Our correspondent reports that Abubakar had earlier addressed officers and men of the Lagos State Police Command, stakeholders and traditional rulers.

He said that the security situation in the country called for more proactive measures if the nation must win the war against violence.

The police boss pledged that he would restore the lost glory of the police, but noted that this might not be possible without the support of the officers and the public.

“We want to build a people-friendly police, which every Nigerian would be proud to be associated with; a force people would be willing to assist by offering information, and they will see the result immediately,’’ he said.

Abubakar added, “at this point in time, any officer that is not willing to embrace the change will fall by the way side.’’

He commended the Lagos State Government for supporting the force, stressing that if other states in Nigeria emulated the state, the crime situation would be drastically reduced.

The inspector-general said that about 300 patrol vehicles would be deployed to the nation’s high ways to replace the dismantled road blocks.

Abubakar promised to strengthen the operations of police institutions to enable them to undertake their responsibilities as officers’ training schools.

Fashola commended the police for their efforts to curb crimes, in spite of insufficient equipment.

He hoped that Abubakar, who had passed through the rank and file to the top, would be in a better position to take the force to a higher level.

The governor urged Abubakar to address issues such as rape, sale of alcohol by the underaged, and assault on children and women.

Fashola noted that if such crimes were checked, the society would be a better place.

Meanwhile, Former President Olusegun Obasanjo says the current insecurity situation in Nigeria has given the country a bad image.

Obasanjo said this on Monday while delivering a paper entitled: “Security, Governance and Leadership” as part of activities to mark Democracy Day celebration in Dutse, Jigawa.

He explained that bombing had become the greatest anxiety to personal security for Nigerians and foreigners living in the country.

“The insecurity situation is already giving us a very bad image and it is adversely affecting investments in Nigeria,’’ he said.

The former president said security and governance were symbolic because they work hand-in-hand, adding: “if there is poor security, there would also be bad government.”

He pointed out that welfare and security were the sole responsibility of the government, adding that performance of any government would be measured by the level of security enjoyed by the people.

Obasanjo said that every citizen should contribute to the collective security of the society.

The former president said that insecurity could threaten government and diminish the collective unity of a country, adding that security was a necessary ingredient for economic development of any nation. 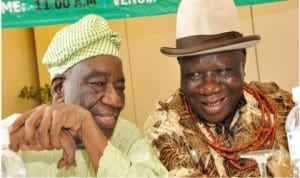