Unveiling the list, which will also partly serve for the team’s two-leg friendly matches against South Africa, Ikhana said he was confident the players would live up to expectations.

Tidesports source reports that the Falcons will face Zimbabwe in Harare on May 26 and in Lagos on June 16 in the 2012 AWC qualifiers.

They will also square up against South Africa in Rustenburg on June 3 and in Lagos on June 23 in the friendly games.

Ikhana also picked five new players for the squad, which was made up of two goalkeepers, nine defenders, five midfielders and five strikers.

Ikhana said putting the squad together had been painstaking in view of the assignment ahead and the need to return the team to winning ways.

“We do know what is at stake, given the mandate the Nigeria Football Association (NFA) has given me, and the fact that we have to make the Falcons the team to beat on the continent again,’’ he said.

The coach, who said he took charge of the team about five weeks ago with 54 players, added that he and his assistants had gone on to prune the team down to 26 about three weeks ago.

“After this, we have had to fuse the team with the invited overseas-based ones, as well as some of the Falconets, and it was from the 28 we had some days ago in camp that we now have 21 players.

“However, we are confident that in this group, we have the best and we will get from it the best that is necessary for the team,’’ he said.

Ikhana said the three overseas-based players will, however, return to their clubs after the match with Zimbabwe on May 26.

“This will leave us with 18 players who will proceed to South Africa for the June 3 friendly game,’’ he said. 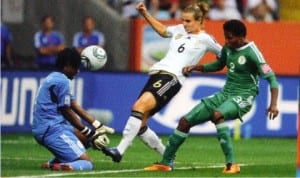 Super Falcons keeper, Precious Dede and a defender (2) trying to prevent a German opponent from scoring at the last FIFA Women World Cup