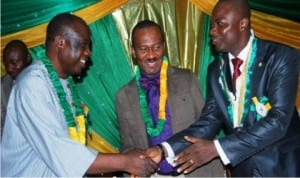 The suspension order was issued by the
Senate and House of Representatives Joint Committee on Power in Port Harcourt
over the weekend during an inspection of NIPP projects in Eneka, Oyigbo, Bori,
Okochiri and Woji, all in Rivers State

Speaking with newsmen at the NIPP injection
substation at Eneka in Obio/Akpor Local Government Area, the Chairman, Senate
Committee on Power, Senator Philip Aduda said the structural design of the
project was defective.

Senator Aduda decried the low quality of
work done by the contractor, Nelson C. Strabek Engineering services, which he
said was not in accordance with specifications.

He said, “all the projects remain suspended,
pending verification by experts”. Senator Aduda, also summoned the officials of
the National Integrated Power Project (NIPP) and the contractors to appear
before the joint committee to give further explanations on all ongoing
projects.

He said the National Assembly was
determined to ensure that power supply increases in Nigeria and to ensure that
all money spent by the Federal Government on power was duly accounted for.

Also speaking, the chairman, House of
Representatives Committee on Power, Hon Patrick Ikhariale expressed
dissatisfaction with the quality of work done so far by the contractors.

As part of its oversight function, he said
it was the responsibility of the National Assembly to ensure that all Federal
Government’s projects were done according to specifications.

Speaking with The Tide in an interview, the
CEO of Nelson C. Strabek Engineering Services and Project Manager, Engr Nelson
Chima said the projects were ongoing and subject to modification and
correction.

He said the projects were awarded in 2011
at a total sum value of N1.8billion, saying that his company had received a
mobilisation of N300million, assuring that everything would be put in shape at
the fine sites before proper handover.

During the project inspection at Omoku, the
chairman of the contracting firm, Rockson Nigeria Limited, Senator Aniete Okon,
said the NIPP injection station was expected to generate 250 megawatts on
completion .

He said the company was facing some
challenges in the release of funds for the project, and assured that the
project would be completed within the next one year.

Beyond Familiar Catharsis …In Defence of General Muhammadu Buhari