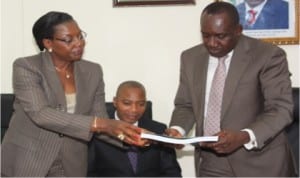 Towards checking the rising prevalence of
HIV/AIDS in Rivers State, the government has established 193 health counselling
and testing (HCT) centres across the state.

Speaking during the inaugural meeting of
Prevention Technical Working Group last Friday in Port Harcourt, the Executive
Director of Rivers State Agency for the Control of AIDS (RIVSAGA), Dr Chimezie
Okeh said each of the 23 LGAs had not less than five of the HCT centres.

Dr Okeh revealed that the HIV/AIDS
prevalence rate in Rivers State was currently more than the national figure.

According to him, while the state’s
prevalence based on the last sero sentinel survey is 6.0 per cent that of the
total national average stands 4.1%

He recalled that when Rivers State joined
the national survey in 1995, the state recorded only 1 per cent, saying that
the prevalence in Rivers state remained low until 2003 when it rose to 7.7 per
cent and ranked 10th in the country.

Dr Okeh, therefore, called on all residents
in the state to access the nearest HCT centre in a bid to ascertain their HIV
status, noting that there were many factors that drive HIV/AIDS in our society.

Such drivers, he said, include “multiple
concurrent partners, informal transactional and intergenerational sex, stigma
and discrimination and culture factors, among others.

He urged those who access the centres to
strictly abide by the advice of health workers, what ever their status as a
means of further checking the spread of HIV in the state.

On the reason for the relatively high
prevalence rate in Rivers State, a consultant medical microbiologist in the
University of Port Harcourt Teaching Hospital (UPTH), Dr Orikomaba Obunge said
it could be the result of several factors.

These factors, he explained, could include
the presence of few implementing partners in HIV/AIDS and inadequate commitment
on the part of donors and partners.

While acknowledging that the Rivers State
Government had done so much in HIV intervention, Dr Obunge noted that a lot
still needed to be done, particularly in the remote areas.

According to him, in order to have more
accurate statistics of HIV/AIDS prevalence, there was the need to adopt a
population-based survey.

This, he said, entails carrying out
HIV/AIDS screening from house-to-house, different from the present survey
method which is basically statistics got from mostly pregnant women who attend
ante-natal and sick people who are brought to the hospital.