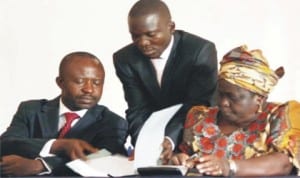 The Minister of Power, Prof. Barth Nnaji, yesterday said
that the Power Holding Company of Nigeria (PHCN) was currently owing over
N88.44 billion on gas supplies.

A statement issued by the Special Adviser on Media to the
Minister, Mr Cdon Adinuba,  which was
made available to newsmen in Lagos, said that Nnaji made the disclosure at a
public lecture in Abuja.

The lecture was organised by the Nigerian Academy of Science
in Abuja.

The minister said that with a new tariff coming into force
on June 1, the PHCN should be able to pay for gas and power supplies promptly.

He said that NNPC was owed N110 billion by various
customers, including governments and their agencies, which accounted for 20 per
cent of the debts.

He attributed the cause of the ongoing power crisis to
non-availability of gas.

Meanwhile, Minister of Petroleum Resources, Mrs Diezani
Alison-Madueke, has directed a team of gas experts to begin a week-long tour of
all gas installations and projects in the country.

The statement said the directive was in furtherance of the
ministry’s 12-month Domestic Gas Supply Emergency Plan meant to fast track the
Gas to Power project.

on Thursday as part of efforts to eliminate bottlenecks in
the project.

“This is a very crucial task that’s why the minister has
directed the Group Executive Director in charge of Exploration and Production
at the NNPC, Engr. Andy Yakubu, to lead the inspection.

“The team is expected to report back to the minister on a
project-by-project basis. The projects include the new gas plants, as well as
the expansion of existing plants and new pipeline infrastructure projects,’’ it
said.

The statement said the team would also comprise officials
from the Gas Aggregator Company of Nigeria, the Nigerian Gas Company and the
National Petroleum Investment Management Services (NAPIMS).

It stated that Alison-Madueke would also host a discussion
on Crude Oil Production and the State of the Oil Industry in Nigeria in Lagos
on Friday.

“The event is designed to provide a forum to deliberate on
current issues and challenges facing the upstream sub-sector of the industry,
such as high rate of pipeline vandalism, asset integrity challenges, among
others,’’ the statement said.

The minister had on April 18 announced a 12-month Domestic
Gas Supply Emergency Plan with the aim of ensuring adequate power supply in the
country.

Revealed! Cause, Suspects Of Rumuokoro Blast