Incidentally, Ministry of Housing had secured their second round ticket courtesy of a walk over victory over their Budget counterparts.

In the second match of the day, defending champions, the Ministry of Special Duties subdued their Finance counterparts 3-0 in a mostly one-sided encounter.

The youthful  Special Duties team had encountered serious resistance from Ministry of Finance early in the game.

But after about eight minutes into the game, age and fitness advantage began to show in favour of Ministry of Special Duties as their opponents failed to cope with the pace of the game, and goals began to flow.

Today, two matches will be decided. Ministry of Social Welfare will take on their Culture and Tourism counterparts in the first match, while the office of the Secretary to the State Government and Ministry of Power will slug it out in the second.

Tomorrow, Ministry of Chieftaincy Affairs would test their might against former champions, the Mighty Sparrows of Ministry of Information and Communications.

Afterward, Ministry of Environment and their Justice counterparts would take to the pitch for the right to berth in the quarter final stage. 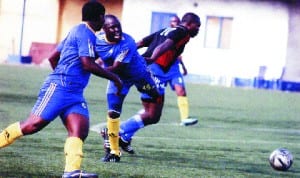 An action recorded during the Head of Service match, yesterday