The Federal Government, has granted approval of N8.3 billion for the construction of inland water ways port at Jamata near Lokoja and the dredging of river channel along Orashi River as part of efforts to resuscitate water transportation system.

The Minister of Information, Mr. Labaran Maku who made the declaration in Abuja, explained that the money was expected to finance the reclamation works along the River Niger.

Giving a breakdown of the  expenditure, Maku said N4.1 billion would be spent on the construction of the Inland River Port, at Jamata while N2billion would go into  the dredging of a channel along the Orashi River from Oguta Lake in  Imo State to Degema in Rivers State.

According to him, N2.1 billion would be expended on shore protection and dredging reclamation works at selected sites along the River Niger.

He further explained that the reclamation works would be carried out at Patani and Aseomoku in Delta, Ilushi in Edo as well as Okun and Kelebe in Kogi State.

In his words, “the executive council approved the construction of an inland waterways port at Jamata, near Lokoja, as part of the main projects to make the dredging of the River Niger commercially viable and useful to the economy.

The minister also noted that the dredging project would include disposal of dredged materials in and around the river to construct a navigation channel that would accommodate vessels with drafts of up to 1.5 metres, noting that the project would create 90 professional and non-professional job opportunities for Nigerians during its execution. 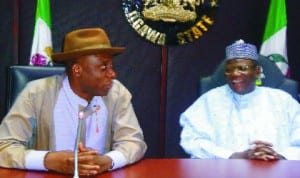