The Federal Government, has inaugurated 499 trainees in batch three of the basic Counter-Terrorism and Counter-Insurgency Course (CTCOIN), a statement from the Nigerian Security and Civil Defence Corps (NSCDC) has said.

The statement signed by Mr Emmanuel Okeh, the NSCDC Public Relations Officer, yesterday in Abuja said that the officers were being trained at the Nigeria Army base camp, Kachia in Kaduna State.

The statement said that the trainees made up of 299 soldiers and 200 NSCDC personnel were inaugurated by the Course Director, Brig.-Gen. Tijani Golau, on behalf of the Chief of Army Staff, Lt.-Gen. Azubuike Ihejirika.

It said the objective of the course was to train combat troops capable of dislodging terrorists operating at any level in the country.

The officers were charged to be ambassadors of the country by striving towards achieving the actualisation of President Goodluck Jonathan’s agenda on security.

The statement said the training was part of efforts by the Federal Government to promote national security by ensuring security of lives and property of Nigerians.

“The training is designed to equip Nigerian soldiers and personnel of the NSCDC to combat the menace of insecurity, foster synergy amongst the nation’s security agencies.

“It is also meant to meet the current challenges of the rising spate of terrorism, which before now had been alien to Nigerians,’’ the statement stated.

It said the training stemmed from the need for all security personnel to be versed in counter-terrorism operations by addressing grey areas in internal security and counter-insurgency.

The statement said the NSCDC Commandant-General, Dr Ade Abolurin, was represented by the Assistant Commandant General in-charge of Zone B, Mr. Bartholomew Ezeigbo.

It quoted the Commandant-General as pledging the commitment of the corps to ensure peace and tranquillity in the country.

“The corps will continue to strive towards the unity of this country by carrying out its mandate with professionalism and renewed efficiency, which is necessitated by various security challenges confronting the nation.

“NSCDC personnel will continue to weather the storm and emerge as better trained officers and men at the end of the exercise,” he said. 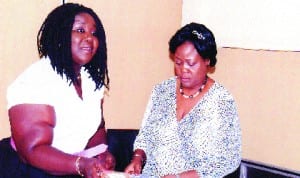 Rivers State Commissioner for Information and Communications, Mrs Ibim Semenitari (left) with Permanent Secretary of the Ministry , Mrs Jotade Adamu, during the presentation of awards to staff of the ministry, yesterday