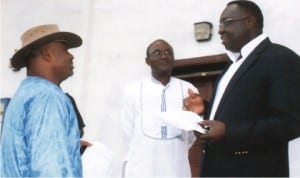 Rivers State Commissioner for Social Welfare and Rehabilitation, Hon Joe Poroma (right) discussing with Consultant in Audiology, Dr Allison Otana (left)during a public hearing on social welfare. With them is a Director in the Ministry, Mr Echeonwu Chinda in Port Harcourt, yesterday.

Indications are that one thousand Naira
(1000) Counterfeit notes are currently circulating in some local government
areas of Rivers State, including Port Harcourt, the state capital.

The Tide investigations revealed that the
local government areas mostly affected are Ikwerre, Oyigbo, Obio/Akpor and Port
Harcourt City and its environs.

Last Thursday, one of the victims who gave
her name as Ms Chioma told The Tide that her sales girl unknowingly accepted a
fake N1000 note from a customer.

The lady, who operates a restaurant at
Igwuruta, scolded her sales girl for the error. How can you make such a
mistake, knowing the  implication of
N1000 which is like a cheque? How much is your salary at the end of the month
if I deduct N1000 from your salary.

Also, a taxi driver, Emeka Prince, who
operates along Rumukwurushi/Igwuruta Road told our reporter that last
Tuesday  he did not know how a fake N1000
note got into his hand from a passenger.

He lamented that the mistake made nonsense
of his business that day, because to lose N1000 in a day and also lose the
expected fare to N150 per drop is a great loss”.

In Port Harcourt and Oyigbo Local
Government Areas, there were reported cases of fake N1000 notes by dubious
customers who use them to pay for goods and services.

The Controller of Central Bank of Nigeria
(CBN), Port Harcourt branch, Ken N. Effa who confirmed the development in an
interview with The Tide, linked the source of the fake notes to dubious members
of the public.

Mr Effa advised unsuspecting members of the
public to be at alert and to always look critically for in built security
features before accepting N1000 notes to avoid falling victim.

“There are three major features which are
easy to find in original N1000 currently, silver lining which is difficult to
tear, imprint of picture images on the water mark side of the note and imprint
of N1000 figure on the golden spot on the note’, he said”.

The CBN boss advised victims to report such
cases to the nearest police station for appropriate action, apparently as a mop
up strategy.

A Port Harcourt-based banker, who pleaded
anonymity explained to The Tide that inspite of
the fact that computer was being used by most banks in modern business,
such counterfeit notes still filtered in and attributed the development to
carelessness on the part of bank cashiers during bulk clearing of notes.

He, however, expressed optimism that when
the cashless policy of the bank comes fully on stream, the issue of
counterfeits would be drastically checked.

Barrister Jacob Obinna, a Port Harcourt
based journalist and lawyer said penalty for those convicted of counterfeit
currency in Nigeria was nothing less than three years imprisonment depending on
the court.