The Rivers State Government, has assured the 10,387 graduates of the Rivers  State College of Health Science and Technology of proper engagement in employment opportunities in line with its planned home-based health care scheme.

Governor Amaechi, who was represented by the Commissioner for Special Duties, Hon Emeka Nwogu, restated that the provision of affordable, accessible healthcare delivery in Rivers State remained the cardinal objective of his administration.

Governor Amaechi, who tasked Rivers people on the maintenance of healthcare facilities provided in the state, said the institution would be supported to train the manpower needed to drive the system.

He said part of the mandate of the Rivers State Primary Healthcare Management Board, was to ensure that graduates of the college were properly engaged to render essential healthcare services to the people.

In his remarks, the state Commissioner for Health, Dr Sampson Parker commended the leadership of the institution for its commitment to academic excellence.

He said the home-based healthcare scheme was programmed by the Rivers State Government to regulate the primary healthcare model for maximal impact.

By the new scheme, the commissioner, said healthcare workers would go to homes for counselling before patients access the health centres”.

He added that the objective was to introduce integrated disease management to reduce mortality rate, clean the environment, and punish those going against healthcare laws.

In his speech, the Provost of the college, Dr Nnanna Onyekwere, said the college had lived up to its expectation in the training of health officials since its inception in 2001.

He identified some of the teething challenges of the institution to include lack of grants and major infrastructural facilities, such as school library, lecture halls, technical workshops and the absence of a governing council for the institution.

He said the provision of these major facilities would lead to the accreditation of more courses for the institution.

Meanwhile, in his efforts at making Rivers state maintain its position as the second largest and busiest economic hub of Nigeria, the Governor Chibuike Amaechi-led administration will continue to carry out the  expansion of all major roads in Port Harcourt, the state capital.

Speaking in an interview with The Tide in Port Harcourt, the Commissioner for Works, Hon Victor Giadom said the government was embarking on the dualisation of several roads within Port Harcourt and its environs.

The roads include Elelenwo, Woji, Garrison-Trans-Amadi, LNG-Nkpogu, Alakahia-Rumuomasi, with a flyover to be constructed at the  Nkpogu interception so that vehicles coming from Nkpogu would ply under the flyover while those from Garrison go up to check traffic congestion in the area.

Hon Giadom noted that work on LNG to Nkpogu road had already begun with the expectation that when dualised, it would match with what was going on at Alakahia-Rumuomasi.

According to him, tenders for the construction of Elelenwo and Woji roads would soon be advertised, to be followed by the award of contracts for their dualisation.

He hinted that the designs for the two roads were being done by a consultant, pointing out that the Garrison-Trans-Amadi-Elelenwo roads would be extended to the East-West Road so that people coming from Akwa-Ibom to Port Harcourt would not experience unnecessary traffic congestion.

The contract for the LNG-Nkpogu road project, according to the works commissioner, had already been awarded and the contractor mobilised, saying that the essence of the road was to provide alternative access to Aba Road.

Giadom noted that work on the second phase of Rumuwoji Mile I market would soon commence to ensure that traders have a conducive atmosphere for trading just as the town market under construction would be completed in or before December this year so as to remove traders from the streets in that vicinity. 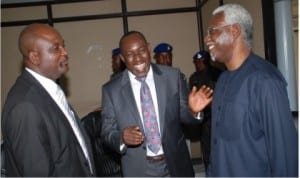