The task force also recovered more than 250,000 tonnes of crude oil from two vessels; MT Oxo and MT Ane, seized from the bunkerers.

The Commander of the 2 Brigade of the Nigerian Army in Port Harcourt and Sector Two of the task force, Brig.-Gen. Tukur Buratai,  told newsmen in Port Harcourt yesterday that the suspects were arrested in the early hours of Monday.

Buratai said residents of Awoba community, a coastal settlement in Degema Local Government Area, had alerted the task force of the vandalism of a Shell pipeline in the area by oil thieves.

According to him, it was the information received from the residents of the area that led to the arrest of the suspects.

Buratai said that the suspects would be interrogated by the Army and handed over to the appropriate authorities for prosecution.

He said the two seized vessels were destroyed by men of the task force.

He also spoke on the efforts made so far by sector two of the task force.

“Since we took over the operation of the JTF, we have been fighting illegal bunkering, piracy, some elements of militancy, as well as illegal refineries popularly known as cooking pots. We have really reduced them drastically.

“As they come up, we strike and ensure that we reduce them to the barest minimum and you can see our efforts are paying off. The level of crude oil stealing has drastically reduced. We are not only restricted within the creeks and rivers around, but we are also on land.”

The JTF commander urged the public to always volunteer useful information to security agencies on the activities of oil thieves and other criminals sabotaging oil installations in the Niger Delta area. 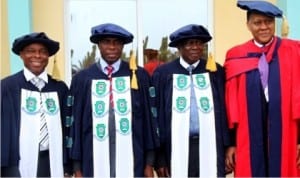