Port Harcourt, the Rivers State capital, has in the last one week become a Mecca of sorts as hundreds of thousands of supposedly qualified graduates jostle for space in the academic and non-academic recruitment charts of the state Ministry of Education.

The Ministry last Wednesday, had indicated its readiness to recruit 10,000 academic and non-academic staff to fill existing vacancies in both the primary and secondary schools dotted across the 23 local government areas of the state; a strategic move to boost teaching and learning in all public schools in line with new government policy direction.

But as the Ministry prepares to begin the recruitment process, The Tide investigations show that thousands of desperate job seekers are now inundating the   Education Ministry and all other institutions related to the ministry, including the Post Primary Schools Board and the state Universal Basic Education Board, on a daily basis in a move to secure employment as teachers.

Among the huge crowd of job seekers are doctorate and masters’ degree holders in various fields, including the sciences, social sciences and arts, while some of those in other sectors of the state’s economy are also positioning to grab a slot in the teaching portfolio.

According to the recruitment guideline for the 10,000 new teachers, prospective applicants must be holders of a minimum qualification of National Council on Education (NCE), Bachelor of Education (B.Ed) and Bachelor of Science (B.Sc) degrees or their equivalents obtained from a government recognized institution of higher learning, while those seeking non-academic positions must possess a minimum of West African Examinations Council (WAEC) or Ordinary National Diploma certificates.

But The Tide learnt that those with competence in computer appreciation and application would be given greater consideration in the recruitment process, simply because the ministry intends to put the information and communication technology facilities installed in the new model primary and secondary schools into effective use to deliver on the government’s desire to engineer an ICT-driven citizenry and workforce.

However, there are indications that the ministry would give specific preference to all subjects taught in the primary and secondary schools, including laboratory technicians and those with cognate security experiences.

The Tide gathered that to get the jobs, all applicants must submit no more than a full page handwritten application on an A4 size paper with a brief description of their experience, and attach current Curriculum Vitae indicating email address along with names and addresses of two referees, photocopies of relevant qualifications and two passport photographs to the office of the permanent secretary of the ministry.

Owing to the juicy remunerations, which include robust financial packages, welfare and training opportunities, sources said non-indigenes are now scampering to hijack as many placements as they can afford.

As a prelude to frisking the 10,000 jobs, report said the non-indigenes are now lobbying traditional rulers, community youth leaders, local government officials and politicians, to endorse foggy local government identification letters to enable them secure the jobs with a pledge to domicile part of their take home pay after recruitment to them.

Sources told The Tide that some of the job seekers are now hanging around designated institutions, especially the ministry, and the two boards to lobby qualified indigenes with huge chunk of money to buy off any window of employment they may get.

It would be recalled that the state Governor, Rt Hon Chibuike Rotimi Amaechi had, while addressing workers on May 1, announced government’s approval for the recruitment of 10,000 new teachers to fill existing vacancies in the new model primary and secondary schools located in the 23 local government areas of the state. 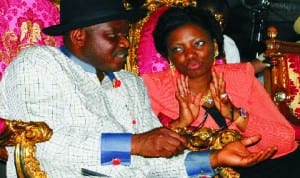