A statement signed by Shell’s Corporate Media Relations Manager, Tony Okonedo, indicated that the action was due to production deferment caused by incessant crude theft and illegal bunkering on Nembe Creek Trunkline (NCTL).

According to him, the shutdown of the line for repairs would result in a deferment of some 60,000bbls per day of production. SPDC is working hard to repair the line and resume production as quickly as possible.

The Tide reports that the NCTL is the major conveyor of SPDC’s and third party production in Eastern operations to Bonny Terminal, and had to be replaced when the old one became weakened due to the installation of many crude theft points.

The new NCTL, which came into service in 2010, has also been repeatedly targeted by crude thieves, requiring that SPDC must now shut down sections of the line to allow the removal of illegal bunkering points.

It would be recalled that SPDC had late December shut in crude oil from the new 90-kilometer Nembe Creek Trunkline (NCTL), in Bayelsa State, triggering the deferment of more than 70,000 barrels of oil per day.

The shutdown of the trunkline followed the discovery of a crude leak occasioned by sabotage activities of local thieves who pierced through the huge pipeline on christmas eve last year.

The company was forced to shut down the trunkline, and swiftly mobilised personnel and equipment to repair the NCTL.

Shell had said in a statement in December that, “a joint investigation conducted by the Department of Petroleum Resources (DPR), the Bayelsa State Ministry of Environment, SPDC and the community showed that oil thieves had installed valves at two points near the Tora manifold in Nembe. More than 200 barrels of spilled oil have been recovered.”

Vice President, HSE and Corporate Affairs, Shell Sub-Saharan Africa, Tony Attah noted then that, “what is really worrying about this leak is that it happened on a facility which was commissioned in October 2009 to replace an old line repeatedly targeted by crude oil thieves. Sadly, the crude thieves continue to hinder efforts to maintain the integrity of key national oil and gas assets.”

Against that backdrop, Shell had promised its determination to work round the clock to complete repair of the line before the end of last January. 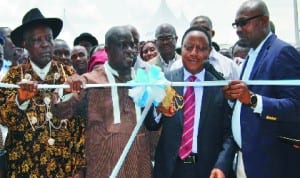 Jostle For 10,000 New Teachers’ Jobs: How To Get It …Non-Indigenes Plot To Hijack Process

Politics Of Incitement …That Bakare’s Call For Public Protest