Rising from its 10th State Executive meeting, the Rivers State government has set up a committee to oversee fresh renovation works at the State Secretariat complex in Port Harcourt.

The Commissioner for Information and Communications, Mrs.Ibim Semenitari made this known while briefing Government House reporters after their meeting Wednesday in Port Harcourt.

She stated that the Executive Council equally deliberated and approved a new water sector bill soon to be forwarded to the State Assembly for approval.

On the secretariat complex renovation, Mrs. Semenitari explained that the measure was taken to check the decay that has overtaken the complex over the years, noting that the current situation of the buildings was deplorable.’’

I’am sure you are aware that the Rivers State Secretariat complex is an eyesore in many cases. It is one of the major landmarks of our skyline and a pride of Rivers people built by the first Military Governor of old Rivers State, she declared.

Against this backdrop, she said a committee headed by the Secretary to the State Government, Mr. Goerge Feyii has been set up and has the Head of Service, Mrs Esther Anucha, Commissioner for Housing, Commissioner for Power, Director-General of Due Process, Bureau for Public Procurement and Commissioner for Special Duties as members.

She explained that this was the first time the Amaechi administration was carrying out renovation on the building, saying that the governor was committed to restoring the beauty of the state secretariat complex. As you known, he is asking for a comprehensive overhaul and renovation so that we can leave for Rivers people a Secretariat complex that is befitting to the state,’’ he said.

Mrs. Semenitari used the medium to comment on the ghost workers problem, stating that a committee has been set up to uncover the fraud.’’ According to her, the committee has been working assidously to identify those workers who are on payroll but are not coming to work and those who no longer supposed to be in the payroll ‘’.

The Commissioner said that the state government was bent in eliminating such fraud in the civil service, hence the plan to transfer the payroll to the State Ministry of Finance for effective monitoring and supervision.

She also expressed the state government support to the ideals of a free press and democracy to mark the World Press Freedom Day, while expressing regrets over the recent bombings of media organisations in the country. He also called on all well-meaning Nigerians to support the press as a platform to debate issues and furthering democracy.

Meanwhile, Governor Chibuike Amaechi would be honoured with an award of anti-malaria ambassador of Nigeria.

The award, according to the Commissioner was in recognition of the governor’s effort in eliminating and fighting the disease in the state. The award would be presented to him today at the World Malaria Day Celebrations in Port Harcourt.

Mrs. Semenitari noted that the state government has done a lot to stem malaria spread since the inception of the administration and was ready to do more, even as she called on the citizenry to join in the celebrations in order to raise awareness on how to tackle the malaise. 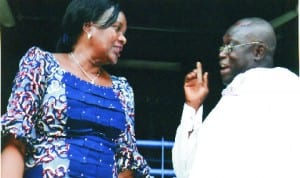