An Abuja High Court has granted leave to the Economic and Financial Crimes Commission (EFCC) to seize 108 properties belonging to the six accused persons involved in the alleged diversion of N32.8 billion police pension fund.

A permanent secretary, Atiku Kigo, is being charged alongside Esai Dangabar, Ahmed Wada, John Yusufu, Veronica Onyegbula and Sani Zira on a 16-count charge preferred against them by the EFCC.

They were accused of complicity in the illegal diversion of the N32.8 billion pension fund, a charge they all pleaded not guilty.

Counsel to the EFCC, Mr Rotimi Jacobs, had filed an application before the court in a motion with number M11005/2012, seeking leave to seize the 108 properties allegedly belonging to the accused persons.

The EFCC, in pursuant of Section 28 of the EFCC Act 2004, attached the list of all the assets belonging to Kigo, Dangabar, Wada, Yusufu, Onyegbula and Zira in the motion.

In his ruling on the motion, Justice Lawal Gummi granted the interim order for the seizure of the properties, alleged to be scattered all over Nigeria.

The anti-graft agency said earlier that the accused persons perfected the alleged fraud in Abuja between January 2009 and June 2011.

The EFCC alleged that the six accused persons had conspired and sequentially withdrew monies from the police pension fund in an account domiciled at First Bank of Nigeria and shared same among themselves.

According to the EFCC, their offence borders on conspiracy, fraud and criminal breach of trust and punishable under sections 97, 315, 115(ii), 119 and 309, of the Penal Code Act Cap. 532, Laws of the Federal Capital Territory, Abuja, Nigeria 2007.

The case has been adjourned to May 28, for continuation of hearing.

The accused, all civil servants, have since been suspended by the Federal Civil Service Commission. 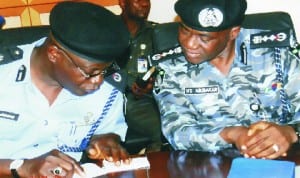 Politics Of Incitement …That Bakare’s Call For Public Protest