The Minister of Finance, Dr Ngozi Okonjo-Iweala, said yesterday that N14.2 billion has been saved on personnel cost through the Integrated Payroll and Personal Information System (IPPIS).

Dr Okonjo-Iweala  made this known in Abuja at the ministerial platform to commemorate the 2012 Democracy Day and the one-year anniversary of President Goodluck Jonathan administration.

She listed the savings as a key achievement of the administration recorded at the end of the first quarter of this year.

She said as at last month, 94,299 public workers have been captured on IPPIS in 75 Ministries, Departments and Agencies (MDAs)

IPPIS was introduced by the Federal Government in 2006 to check the incident of ghost workers in the public service.

The system was conceptualised as a central payment process for all public servants whose emolument is drawn from the Consolidated Revenue Fund.

The minister said that government had made remarkable progress in the implementation of Government Integrated Financial Management Information System (GIFMIS).

According to her, 108 MDAs had been integrated on GIFMIS, while 421 officers had been trained on the scheme.

On the  2012 budget implementation, Okonjo-Iweala, who is also the coordinating minister for the economy, said N151billion was released to MDAs in the first quarter.

She said that the ministry had encouraged transparency and accountability through a monthly publication of the revenue allocations of each level of government.

In his remarks, the Minister of State for Finance, Dr Yerima Ngama, said the ministry achieved a record reduction on disputes related to the Federal Accounts Allocation Committee (FAAC).

According to him, October to December 2011 fourth quarter revenue of FIRS stood at N1.2 trillion, which is 39.71 per cent higher than the federal government’s quarterly target revenue.

He said that increased anti-smuggling activities resulted in seizure of 5,748 goods, including textiles, poultry, used compressors, furniture and general goods.

The minister put the value of the seizures made from January to December 2011 at N8.4 billion. 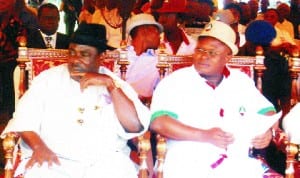