About 10,000 new  teachers are expected to be employed by the Rivers State Government, Governor Chibuike Amaechi has said.

Addressing workers at the May Day rally in Port Harcourt yesterday, Rt. Hon. Amaechi said the plan is geared at boosting the manpower in the educational sector.

Amaechi said, “the council has just approved the employment of 10,000 teachers. You will see the advert tommorrow or next in the newspapers.

The governor called on the National Union of Teachers(NUT) to collaborate with his administration in transforming the educational sector, while urging the union to also address the issue of corrupt activities by some of its members.

He therefore sought for a meeting with the union to address the matter, saying that his administration would not compromise its stance on free education and health to improve the lives of the citizenry.

Governor Amaechi, while reacting to demands made by labour leaders in the state to create employment, said that it is not the sole duty of government to do so.

He therefore charged labour, to look inwards and devise a means to create employment.

The state chief executive noted that,’’ all of us must work together to create employment opportunities””

Amaechi noted that one way his administration has devised to create jobs was through the Public/Private Partnership(PPP),saying the state has recorded success already with the policy with Pabod Breweries and Risonpalm expected to create 5,000 jobs when it is finally resuscitated.

Earlier in his speech, Chairman of the Nigeria Labour Congress(NLC), Chief Chris Oruge had stated that this year’s workers’ day celebration was special  as it marked the 100th year of labour unionism in the country.

He, however, lamented the swelling unemployment, adding that the situation has affected workers and created social tension.

According to Chief Oruge, if the situation persists. “it could create a platform, which anti-democratic forces could readily exploit to undermine the system’’.

Chairman of the Trade Union Congress(TUC) in the state Comrade Chika Onuegbu, in his speech, averred that the increasing unemployment have swelled over the years, pointing out that it was a threat to the nation’s security, unity and democracy.

Comrade Onuegbu, while commending Governor Amaechi for his achievements so far, urged him to consolidate on his first tenure achievements by completing the various ongoing projects in the state.

Earlier, the state Ministry of Education had expressed determination to ensure that its educational policy meets the required standard as the Rivers State Government has commenced steps towards engaging adequate and qualified manpower in its primary and post primary schools.

A statement signed by the Permanent Secretary, Rivers State Ministry of Education, Richard Ofuru said the recruitment would cover all subjects taught in both primary and secondary schools, while the non-academic staff recruitment would be for laboratory technicians and security personnel.

It would be recalled that the Amaechi administration has built over 2590 new primary schools and model schools in some local government areas of the state, while many more are at various stages of completion.

The development, many believed would greatly reduce the number of unemployment graduates in the state and help transform the educational sector. 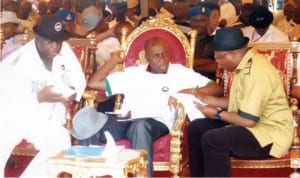