The game is played by five players on each side on a pitch smaller than the usual football pitch, using a slightly different set of rules

Abraham told the Tidesports in an interview in Abuja after a three-day Futsal training course for referees, coaches and instructors that the NFA was working towards floating a Futsal League so that other teams may emerge.

He said participation would be “either from the geo-political zones or selected states that have halls and gymnasiums to play the game’’.

He told  Tidesports that the enthusiasm for knowledge exhibited by the participants was commendable despite the fact that the game was new to them.

“With the rate at which we have operated these three days, we’ve had intensive training with practical and demonstrative sessions of high international standards.’’

Abraham, however, noted that for the game to receive popularity, it should be taught in schools.

“The game could be replicated in the curriculum of schools where the children during their physical education classes will be taught the rules of the game.

“In every sport, we should go back to the grassroots and use schools as our basis for teaching the laws of the game.

“Sometimes our national teams lose matches not because we don’t have the players or because they are not skilful, but because they lack the knowledge and educative aspect of the game.’’

Course coordinator, Linus Mba, also told Tidesports that there was a growing interest for the game which was why the NFA was at the fore of educating young people about it.

“We want to sustain the growth of this calibre of players by training people and have them to continue what others are already achieving.’’

Some of the participants who spoke with Tidesports said the training would give them a better idea of the game and make their output remarkable.

An instructor, Tunde Irukeya, said he was privileged to be part of the course because awareness about the game was still limited in Africa.

“It is a very good thing the NFA has done this because from here states and clubs will start gearing up for the game.’’

According to him, it was a bit different from regular football because there were more signals to use than in normal football and more concentration was required to referee the game.

A referee, Lilian Amadi, also said that the training would equip them to become better Futsal referees.

“I’ve really gained knowledge wise because before now, I didn’t really understand what Futsal football was about. I’ve come to understand that it is more tedious than the 11-A-Side game.

“It also requires more mental and physical alertness from the officials because the exercises involved are very strenuous but helps us psychologically,’’ Amadi said. 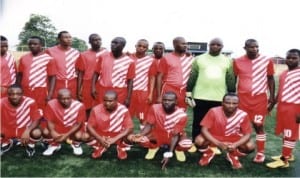