The Minister of Power, Prof. Barth Nnaji, has said there would be improved power supply in the next two months.

He gave the promise at a meeting with members of the Organised Private Sector (OPS) and other stakeholders in Lagos.

The minister said that these challenges were already being addressed.

“Within the next two months, there will be moderately improved power supply and a renewed distribution model,” he said.

Nnaji said that the Ministry was already discussing with dealers of generating sets on the need to support the Federal Government’s efforts towards ensuring stability in the power sector.

According to him, in the next seven months, there will be completion and operation of some new power generating plants, transmission lines and a more developed distribution pattern.

“Equally, the reconstituted Nigerian Electricity Regulatory Commission (NERC) will provide the implementation of a tariff review which will commence on June 1,’’ he said.

Nnaji said that the new tariff would give rural dwellers the opportunity to pay N4 per kilowatt instead of the N7 they were currently paying.

He said that the reform in the power sector would be completed between 2013 and 2015.

“The reform will allow the privatisation of the generating centres and the distribution centres which will then give higher efficiency and have input of high funding levels to increase power supply to the people.

“The ongoing strengthening of the operations of the regulatory agency and the “corporatisation” of the bulk trader will fast track the medium-term plans,’’ he said.

The minister assured that privatisation of the sector would be done in a transparent manner.

Nnaji said that the federal government would pursue diversification into renewable energy sources between 2015 and 2020.

“This will include small and medium hydro-power, solar, bio-waste to energy and coal,” he said.

The minister also launched the Electricity Customers Service Web Portal which was opened to customers to lodge their complaints about the power issues. 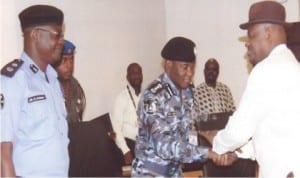