No fewer than 15 people have been reportedly killed in an explosion and gun shots early yesterday at a Catholic Church inside the campus of Bayero University, Kano.

An eyewitness said the bombers had first thrown in explosives and fired shots, “causing a stampede among worshippers”.

“They now pursued them, shooting them with guns. They also attacked another service at a Sport Complex,” he said.

Another eyewitness said some gunmen attacked the faithfuls while they were holding a service at 8.45 a.m. in a lecture theatre at the old site of the university.

The witness said the gunmen threw some improvised explosive devices in the lecture theatre and opened fire on those who attempted to run away from the scene.

Mohammed Suleiman, a History lecturer at the university, said security guards had to run for their lives when the violence broke out.

“For over 30 minutes, a series of bomb explosions and gun shots took over the old campus, around the academic blocks,” he said.

“I counted at least 15 dead bodies. I think they were being taken to the Aminu Kano Teaching Hospital,” a witness said, adding that he had seen many more people being treated for injuries.

The two lecturers were killed as a result of multiple blasts that rocked St Stephen Catholic Chaplain, Bayero University, Kano.

He disclosed that Prof. Ayodele of the Chemistry Department and Prof Andrew Leo of the Library Department, were among worshippers attacked at Theatre Two near Sport Complex, old Campus of the institution.

Also, the spokesman of the Nigerian Emergency Management Agency (NEMA), Mr. Abubakar Jibril, is reported to have estimated the number of the dead to be 18.

However, a source on the campus who spoke on telephone from Kano said the number of people being ferried out of the campus through ambulances belied such estimates.

The American government, just about a week ago, warned of a coordinated spate of attacks by terrorists in Abuja and its environs. This was, however, pooh-poohed by the Federal Government, which dismissed the information as alarmist.

At the time of filing this report, no group had claimed responsibility for the attacks.

However, the police in Kano have said seven persons died and many others injured in the latest round of bomb attacks on worshippers at Bayero University, Kano, yesterday morning.

The Police Public Relations Officer, ASP Magaji Majiya, who made the confirmation, said in a telephone interview with newsmen that the injured were taken to Aminu Kano Teaching Hospital.

The witness said members of the Joint Military Task Force (JTF) later arrived at the scene and engaged the attackers in a gun battle.

The JTF spokesman, Lt Ikedichi Iweha, said military operatives had been deployed to the area to restore order.

Iweha refused to give further details, saying, “I can’t give you details of what happened as our people are now at the scene of the incident.”

Reacting to the incident, the Coordinator, Patriotic Alliance of Nigeria (PAN), Chief Maxi Okwu, advised the Federal Government not to negotiate with the Boko Haram sect but deal decisively with the group.

Okwu, whose organisation comprised members of opposition political parties, made the call in a telephone interview with newsmen while reacting to Sunday’s bomb attack in Kano.

The President of Arewa Youth Consultative Forum, AlhajiYerimma Shetima, said, “the perpetrators and their sponsors must be traced and brought to book.” 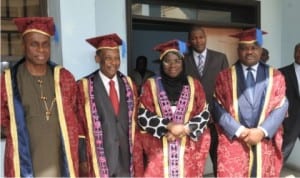