Speaker of House of Representatives, Alhaji Aminu Waziri Tambuwal, says the Governor of Rivers State, Rt. Hon. Chibuike Amaechi is a role model for other public officers in the country.

Alhaji Tambuwal  made the declaration after a project tour in Rivers State shortly after attending the burial of Eze C.C. Nwuche, father of former Deputy Speaker House of Representatives, Hon. Chibudom Nwuche yesterday in Port Harcourt .

The House of Representatives Speaker observed that there was huge transformation in the state, “you could see clearly that the Government is at work and what is being done is not only just work but quality work.

‘’And I believe that the Governor deserves commendation to justify the resources Rivers State Government is receiving”, he said.

Alhaji Tambuwal stated that what is on ground in Rivers State had transformed the state from what it was before, “I have been here several times several years back and I am impressed with what I have seen”.

The Speaker noted that, “ clearly, there is a challenge to other governors and indeed to all of us who are in public service”.

“Public service is a call to duty, transparency, accountability and selflessness. It is not all about luxury or to be in cozy environment of your office or home or to be assured you should be worshipped.

“For me, it is a challenge for every public officer to go out and work for the people that put you there and I believe the Governor is doing that”.

Among the projects visited by Tambuwal include, Omerelu-Owerri Road, Adokiye Amiesimaka Sports Complex, Songhai Farm at Eleme, model secondary and primary schools built across the state.

On the other hand, Alhaji Tambuwal has called on the citizenry to be patient with the House of Representatives in the implementation of the fuel subsidy regime report.

So far, he explained that the federal lawmakers had shown resolve to end the corruption that rocked the policy, and promised that the report would be appropriately implemented.

He called on the public to understand and reason with the parliament, especially on its role in governance, explaining that the legislature had limitations and responsibilities, but assured that it would do its best to carry out its responsibilities. 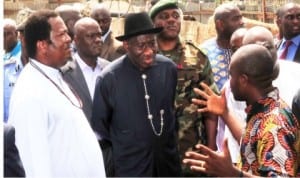 President Goodluck Jonathan (middle), listening to one of the reporters of ThisDay, Mr Senator Iroegbu (right), during his visit to the scene of the bomb blast at ThisDay's office in Abuja last Saturday. With him is the Publisher of Thisday, Mr Nduka Obaigbena (left).

Hazards So Fatal …Thankless Path Of A Vibrant Press